By Daniel Birchfield
0 Comments
A Highlanders player has asked for the off-field incidents in the build-up to the annual first XV clash between St Kevin’s College and Waitaki Boys’ High School in Oamaru to stop. 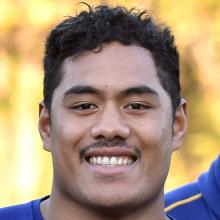 Sione Misiloi
A video posted on social media yesterday with the hashtag #respectthegame was fronted by former St Kevins' First XV player Sione Misiloi, who linked up with the Highlanders before this year’s Super Rugby competition. He told those involved to "stop the off-field stuff".

"It’s a great occasion, the Blood Match ... I just want to wish both schools good luck. [It is] a great occasion for the community of Oamaru to come together and support you guys.

"It’s all about the community over there and what you do off the field is affecting them ... stop that stuff and enjoy tomorrow."

The video came after vandalism at both schools this week, including at least one red-coloured swastika being spray-painted at St Kevin’s, and an altercation last week, allegedly between St Kevin’s pupils and former Waitaki Boys’ pupils.

Oamaru police have confirmed an assault complaint is being investigated, as is the vandalism to St Kevin’s.

Waitaki Boys’ High School rector Darryl Paterson said both schools "deplore the vile actions of a small number of Waitaki old boys, that have tarnished the proud reputation of all past pupils".

"The annual interschool [match] ... is the culmination of a week of outstanding competition and sportsmanship, which epitomises the 93 years of mutual respect and friendly rivalry which exists between our schools.

"Both schools are looking forward to the class of 2020 writing their chapter in the wonderful history of this unique event."

Today’s game is scheduled to kick off at Whitestone Contracting Stadium at 1.30pm.