No joy for Highlanders over ditch 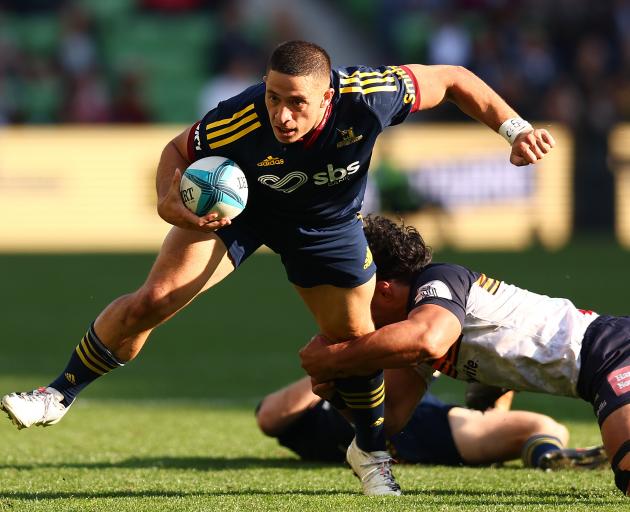 Freedom Vahaakolo of the Highlanders is tackled during his side’s round 10 Super Rugby Pacific match against the ACT Brumbies at AAMI Park in Melbourne yesterday. PHOTO: GETTY IMAGES
Perhaps those Australians are not so bad after all.

The Highlanders may be clear of New Zealand opposition, but it was a familiar tale that unfolded in Australia.

They were pesky and withstood a ton of early pressure to keep themselves in the game.

But ultimately they fell short — again.

First five Noah Lolesio scored in the corner late in the game, sealing a 28-17 win for the Brumbies in Melbourne.

Lolesio’s boot had been key, helping keep the Brumbies score ticking over as the Highlanders worked their way back into the game.

But it was the slow start, after two early tries left them trailing 14-0, that cost the Highlanders.

Discipline and the inability to exit hurt the team, giving the Brumbies opportunities to set up lineouts deep in Highlanders territory.

They attacked dangerously off the back of those over the first 20 minutes, Scott Sio in particular providing good front-foot ball.

That left the Highlanders clinging on, which they made a reasonable job of.

They were afforded a stroke of luck when Brumbies fullback Tom Wright dropped the ball over the line in the second minute.

However, eventually the pressure told. Sio made a rampaging run off the back of a lineout, after which openside flanker Jahrome Brown busted over to open the scoring.

A clumsy passage off a lineout, in which the Highlanders were penalised following a charged clearance, led to the second try.

They initially defended it well, before a lineout drive from a second penalty let hooker Lachlan Lonergan make it 14-0.

The Highlanders began to fight back from there.

But, for the second week in a row, they had left themselves too much to do.

"I think we had a slow start this afternoon," Highlanders stand-in captain Mitch Hunt said in the post-match television interview.

"A couple of early tries just let them get a bit of momentum. A little bit of our kick game and exit let them hang around in our half.

"I guess a positive [was] when we did get opportunities in the 22, we started throwing punches and scoring, but we left it too little too late."

The Highlanders had their best passage of the first half in the last 10 minutes before the break.

They began stringing phases together and eventually Thomas Umaga-Jensen crashed over close to the posts.

It looked as though the score would remain at 14-7 at halftime, when a brilliant Marty Banks tackle on the line created a turnover and possibly saved a try in the process.

But a mix-up between Sam Caird and Ethan de Groot ended in a the latter being offside, allowing Lolesio to make it 17-7 on halftime.

Lolesio added another three shortly after the break, although the Highlanders were perhaps harshly penalised for a high tackle.

However, it was the closest the Highlanders could get.

The teams exchanged penalties, before a Thomas Umaga-Jensen break and grubber gave Sam Gilbert a chance in the corner — but the replacement winger could not ground the ball.

Lolesio capped his game by finishing after being put into space by what looked to be a forward offload from second five Irae Simone, putting the game out of reach for the Highlanders.

Hunt admitted it was a tough one to take.

"This was a tough one, I think, to digest for us tonight.

"We had a really good week, we felt real confident coming over here to play these guys.