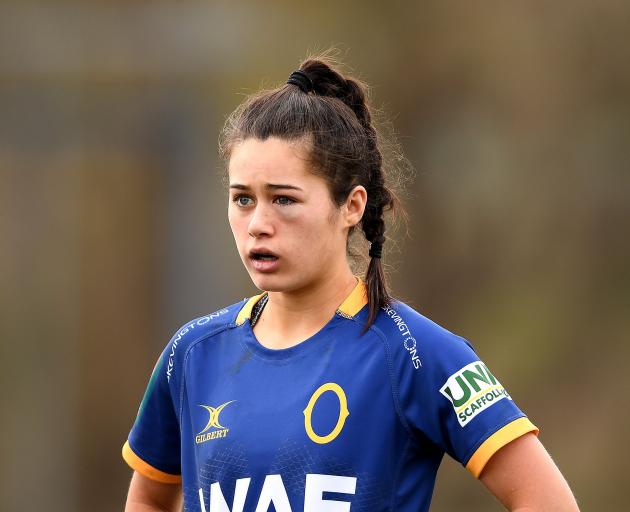 Maia Joseph earlier this year. Photo: Getty Images
A lot of good things have come out of the Otago Spirit season.

The 19-year-old has shone in her first season in the Premiership.

She debuted for the Spirit in the rejigged competition in 2020 and showed plenty of promise.

But her game has improved dramatically this season.

You might expect that, given the family link. Her father Jamie Joseph played 86 games for Otago and went on to play international rugby for the All Blacks, the New Zealand Maori and Japan.

He coached the Highlanders to Super Rugby glory in 2015 and has been the coach of the Japanese national team since 2016.

Joseph has lucked out with her genes. But it is not all down to her physical prowess.

She is a quick learner, too. The University of Otago first year health student is nailing skills she only just started learning. The box kick, for example, was not really part of her game until this season.

If you talk to her coach Scott Manson, he will tell you she now has one of the best in the country.

‘‘She has been outstanding,’’ Manson said.

‘‘She is so diligent in her craft. The deficiencies that were in her game six weeks ago are out of her game now.’’

‘‘There are still a lot of improvements to be made. But my kicking game has been a big focus for me this year.

‘‘I did not develop it much at all last year. I played it pretty safe.

‘‘But I’m experimenting a bit more this year.’’

Keep experimenting. It is working.

Joseph was one of Otago’s best in the disappointing 31-3 defeat by Bay of Plenty in Mount Maunganui last weekend.

Both teams were effectively playing to avoid relegation from the Premiership.

The Spirit was missing several key players and had a difficult journey to get there, but Manson said its opponent was ‘‘fantastic’’.

‘‘But if we are relegated then that would be quite gutting because we have pushed a few teams but we just haven’t been quite clinical enough.’’

There is still a small chance of Otago avoiding relegation but first it will need to upset the defending champion Canterbury at Forsyth Barr Stadium today.

The visiting team is undefeated this season.

The Spirit has lost all five games but has been more competitive than those results suggest.

It had opportunities against Waikato, Wellington and even Auckland.

‘‘It is frustrating we haven’t been able to finish,’’ Manson said.

‘‘But we have been in the fight and that is the most important thing.

That was certainly Joseph’s view.

‘‘It has been awesome playing against some of the best female rugby players in the country, and I feel like being in this grade has helped me develop a lot as a player as well,’’ she said.