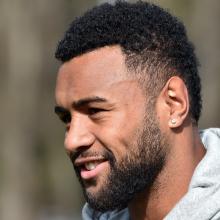 But no-one should be complaining. He is playing well and creating plenty of tries and chances for those around him.

At the start of the season, Nareki had played 30 games for Otago in three seasons and, in that time, had scored an impressive 24 tries.

This year though it has been a no show for Nareki on the tryline as others have picked up the five pointers.

However, Nareki has contributed in many other ways.

His well-educated left foot is a real asset for Otago when it is trying to clear out of its own territory from the kick-off.

Nareki had a top game against Northland last Friday even though he did not score.

He made a well-timed entry into the backline which broke the Northland defence and then threw a nice pass to fellow winger Freedom Vahaakolo who scored in the corner.

Vahaakolo scored another try, popping up on Nareki’s left wing and going over when Nareki was drawn infield.

Nareki (22) has also been outstanding on defence this season, making valuable tackles, and he saved a try in the match against Counties-Manukau 10 days ago when he tackled Counties-Manukau winger Kirisi Kuridrani into the corner.

All good wingers these days are given a roaming commission and Nareki has been doing plenty of that of late.

Nareki made his debut for the Highlanders this year and was named rookie of the year for the team at their end-of-season awards.

He managed to score five tries for the Highlanders this year in both the full Super Rugby competition played at the start of
the year and Super Rugby Aotearoa competition.

Otago takes on Canterbury in Christchurch on Friday night.

■ Last year’s Otago coach Ben Herring will be the assistant coach of the Hino Red Dolphins in the Japan League.

Herring will be at the club’s defence for two years.