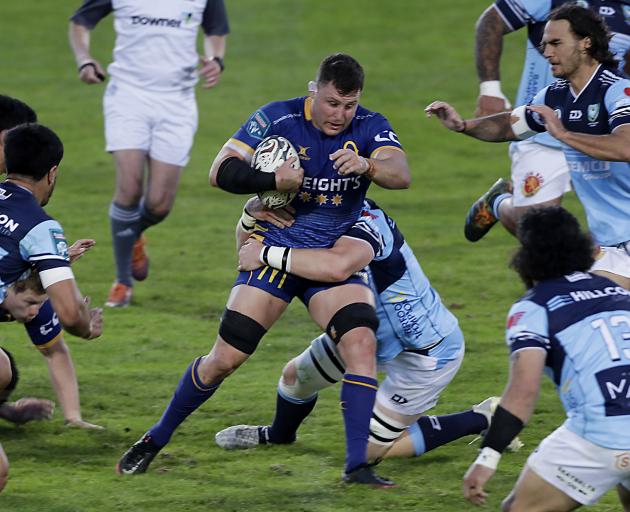 Otago No 8 Dylan Nel battles on amid a sea of opposition Northland players in the sides’ NPC match in Rotorua last night. Otago won 24-13.PHOTO: GETTY IMAGES
At first it looked as though Otago was going to run away with it.

In the end it had to defend for all it was worth to hold on.

But defend it did.

Otago tackled its way to a 24-13 win over Northland in Rotorua last night.

It led 17-0 after a scintillating first 10 minutes in which it tore through the home defence at will.

Northland fired back, though. Otago's discipline let it down and it spent virtually the entire second half hard on defence in its own half.

It did not yield.

It conceded just three points, keeping Northland out on the line on multiple occasions.

The loose forward trio was immense both in tackling — No 8 Dylan Nel made an unbeliev able 23 tackles — and turning the ball over.

The forward pack's rolling maul defence was exceptional too.

After absorbing plenty of pressure at 17-13, a Josh Ioane offload set alight a movement which put Sio Tomkinson in for his second try to seal the win with eight minutes left.

The win snaps a three-match losing streak and is a significant step towards the NPC Cham pionship semifinals.

It was also a display in which offered glimpses of how dangerous this team can be.

In those first 10 minutes Otago was scintillating.

The forwards were physical, the backs were electric and the Northland defence had no answer.

Will Tucker proved a reliable target in the middle of the lineout and his off the top ball was dangerous to attack from. Ioane took the ball dangerously to the line, playing the role of facilitator on several occasions, while Nel carried strongly to provide go-forward.

It took Ioane just one minute to put the Northland defence on the back foot, while quick break down ball helped Otago create space out to the right.

Some nice hands found Sam Gilbert out wide and he linked with Tomkinson on the inside, the centre scoring after just two minutes.

A second try followed three minutes later, when an offload from Ray Nu'u put Freedom Vahaakolo into space from a lineout.

A penalty to Ioane followed not long after and Otago appeared to be cruising.

But that was as good as it got.

Northland struck back straight away, breaking through the first time Otago had to genuinely defend.

Rene Ranger brushed off Vahaakolo close to a ruck down the blindside, and offloaded for Nock to score.

Ranger was involved again late in the half, as his break set

Northland up to go wide and put Jone Macilai over down the left wing.

From there Otago dug in. It found itself pinned inside its 22 for long periods of the second half.

But it never stopped tackling and while it gave away its share of penalties — which left it to play with 14-men late in the second half when Tucker was yellow-carded — it did enough to hold.