Rugby: Slade out for season, Treeby doubtful for next game 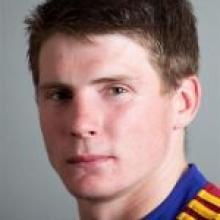 Colin Slade
Colin Slade is gone and the man outside him is also looking doubtful for this week's game against the Crusaders.

Second five-eighth Shaun Treeby damaged a medial ligament in his knee early in the game against the Rebels in Melbourne on Friday night and soldiered on, only to be taken off near the end of the game.

Coach Jamie Joseph said Treeby was tough enough to continue last Friday night but he would probably be without the Wellington-based midfielder for this week, anyway. He would be assessed later in the week.

Slade, though, would not be seen in a Highlanders jersey again this season but should not be counted out for the All Blacks for the World Cup later in the year, Joseph said.

Slade collided with the head of Rebels defender Michael Lipman early in the match, breaking his jaw, and it was operated on in Melbourne on Saturday.

"I feel pretty gutted for Colin. He's had a really bad break and it is going to take him two to three months to get over that, so the season is over for him as a Highlander," Joseph said.

"He is a class player and can still be a big part of the All Black campaign this year. There are a few test matches to play this year before the World Cup and Colin can be right for those. I really hope he can."

It was Slade's second broken jaw of the year, after he smashed the other side of his face in the opening pre-season game in late January. Signed as the key man for the Highlanders, he will have played less than 130 minutes for the side this season.

Back-up first five-eighth Lima Sopoaga looms as the replacement and has played two games of the club rugby for Zingari-Richmond over the past couple of weeks as he battles back to fitness from a shoulder injury.

Joseph admitted it was a big ask for the 20-year-old to go from club rugby to Super 15.

"But I thought Robbie Robinson played really well on Friday night and we've still got Tony Brown floating around down here, so we have options."

Although Slade will be missed, his absence was hardly felt on Friday night as the side put the Rebels to the sword, winning 40-18, to go to fifth in the table.

"I think we got the balance right. We played with width and depth and played controlled when we had to be. The guys have been putting in a lot of hard work this year and it paid off," Joseph said.

"We played well for 30 to 40 minutes against the Brumbies and then went too far against the Cheetahs but we brought it back on Friday night ... It was kind of ironic that we were looking to use a lot of width and move them around yet our first try was from a driving maul from a lineout."

The Crusaders await on Saturday in Nelson, followed by the Blues at Carisbrook on April 29.

"The Crusaders followed by the Blues is clearly going to be a massive challenge for the team. But we've just got to get on with the job and play as well as we can."

Winger Kade Poki is battling a knee injury and can not train during the week but he was good enough to score a stunning try on Friday night as he swatted off at least half a dozen defenders in a 40m run.

"Imagine what he could do if he could train during the week. But two-thirds into the season he hasn't got the time to repair it. If he is not right we won't start him but he seems to coming right on game day."

The Crusaders marched to the top of the table after beating the Chiefs 34-16 in Mt Maunganui on Friday night.

The Reds are second after they beat the Bulls 39-30 in Brisbane while the Blues stay in the top six, thanks to an explosive first half, which set up a 31-17 win over the Waratahs.

The Stormers beat the Lions 33-19 after a tough battle in Johannesburg while the Hurricanes scored a try in the final minute to beat the Cheetahs 50-47 in Bloemfontein.

Last night in Canberra, the Western Force beat the Brumbies 27-19.