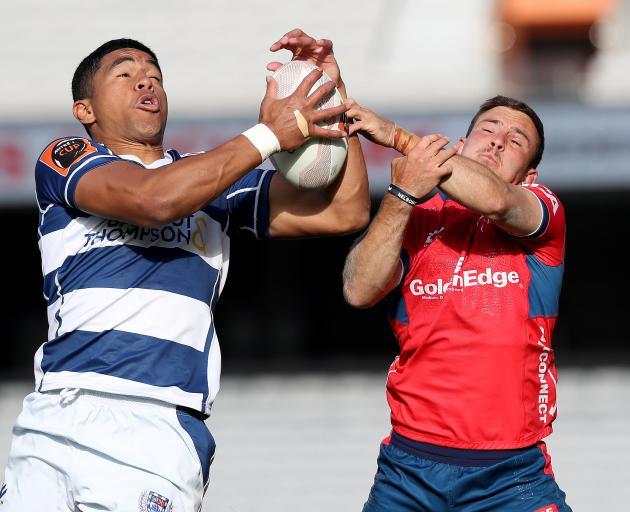 Auckland's Salesi Rayasi and Tasman's Mitchell Hunt go for a high ball. Photo: Getty Images
The climax of the provincial season takes place this weekend with the finals of the Mitre 10 Cup. Rugby writer Steve Hepburn looks at the two finals.

Why Hawke’s Bay will win

The Magpies have been running rampant this season. The side got a favourable draw in the competition and made the most of it. It has blitzed many teams and put nearly 60 points on semifinal opponent Taranaki. Ash Dixon can not stop scoring tries and Folau Fakatava is on top of his game. Any side which can afford to have Gareth Evans in the reserves has to be strong.

Why Hawke’s Bay will lose

The side has not always clicked and Northland will be up for a fight. Discipline sometimes goes astray and the side can become too obsessed with the driving maul.

Why Northland will win

The men from kauri country were tough, aggressive and accurate in the win over Otago last weekend. With a bruising set of forwards and a solid backline, the side will not stand back to anyone. Northland will have nothing to lose going into the match, and if it produces more of what happened against Otago then will be in with a shout.

Why Northland will lose

The side expended plenty of energy against Otago and not much is left in the tank. The Magpies will not be as slow as Otago. Northland has a limited attacking game which is easy to counter.

Hard to see Northland getting a win. Hawke’s Bay at home is hard to beat and has a strong bench, so will run away with the game. Hawke’s Bay 41-13.

Why Auckland will win

The home side finished top of the table and has power up front and speed and guile out the back. In Salesi Rayasi the Aucklanders have a player who can score tries out of nothing and has all the skills. Auckland is strong at set piece and will have plenty of home town support.

Why Auckland will lose

The side lacks — apart from Rayasi — any real class players who can change games. When the going gets tough, Auckland sides of the past have folded, and this could happen again.

Why Tasman will win

Tasman did it last year so it knows how to win. Key players are in form and can do well when the game becomes an arm wrestle.

Why Tasman will lose

It has never really clicked all year for Tasman. The side has just ground out wins — none uglier than its victory in the semifinal against Bay of Plenty last week. Do that again and it will be a long night for the Mako.