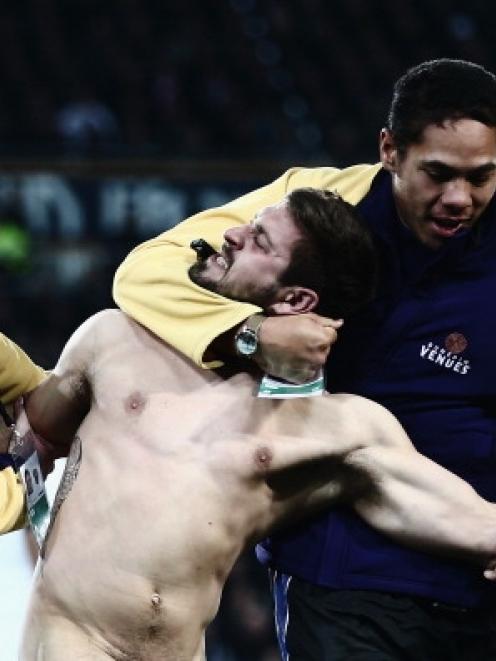 A streaker is taken from the field during the International Test Match between the New Zealand All Blacks and England at Forsyth Barr Stadium. Photo by Getty
A security guard who "smashed" a streaker at last night's All Black's game has been criticised by some viewers for the bruising tackle.

The male streaker dodged security to invade the pitch in the second half of the test against England at Dunedin's Forsyth Barr Stadium.

But he was quickly taken out by a fast-moving security guard who launched a tackle from behind, sending him to the ground.

The streaker is then held in a headlock, and two security guards escort him off the pitch.

Video footage of the incident has clocked up almost 117,000 views on Youtube, and condemnation from some fans who said the security guard went too far.

The hard-hitting tackle was described as "bone crushing", "unnecessary" and "mental".

Others joked he should have been playing on the team, rather than manning the security.

"We're not talking some small hit here or even a grab around the neck in [an] effort to send the nude fan to the ground. We're talking a full on, two-footed launch from three feet out that would make hard hitting NFL Pro Bowl talent blush.

"I mean seriously – look at [the] dude's neck jerk back. He's lucky it stayed attached to his head."

On Youtube, commentators suggested the move was "a bit excessive".

VoztokTV said: "Something tells me that security guard almost made the team but ended up with that job instead."

Namehereplease posted: "Wow that is mental. I hope that guy is ok. I know sure the guy shouldn't have been there but there is sensible and then there is being a munter acting like he is trying out for gridiron."

- by Patrice Dougan of APNZ