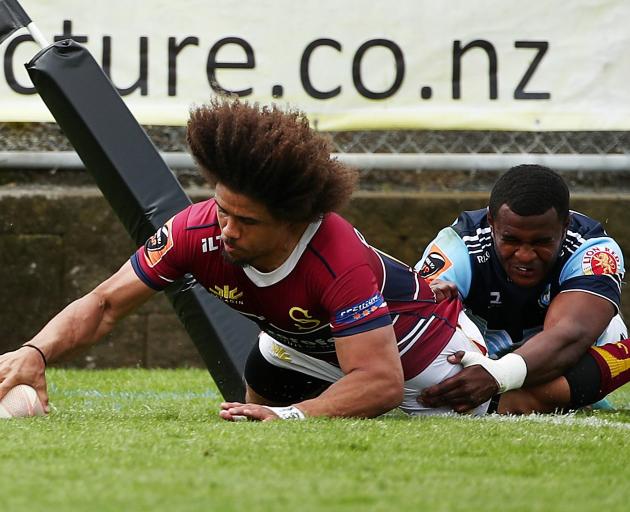 Isaac Te Tamaki, of Southland, crosses the tryline in the tackle of Jone Macilai, of Northland, during a round five Mitre 10 Cup match in Whangarei. PHOTO: GETTY IMAGES
Southland centre Isaac Te Tamaki has been part of the great shutdown in 2020.

The Stags defence has been almost impenetrable this season.

The team has conceded an impossibly low 82 points in six games and registered a couple of upset wins.

The 25-year-old is pretty satisfied with that aspect of the game. It is the attack which has caused frustration.

The Stags have netted just 73 points.

Still, Southland is a vastly improved side from those of the past few years. The 27-game losing streak is well behind the team.

"Results-wise this year has been better," he said.

"But as a team we are still frustrated by the last few weeks because we know we can be better than what we have been."

The 18-14 loss to Northland, in particular, was an opportunity missed.

"We know how good this team can be and it is just so frustrating the fact that it hasn’t quite clicked as we want it to.

"We’ve got to be more ruthless with our execution [on attack] and just make sure we nail every opportunity we get."

That opportunity will come against Tasman in Nelson tomorrow afternoon.

It is a tough assignment. Tasman is the defending champion and is on track to reach the premiership playoffs again, whereas Southland’s loss to Taranaki last weekend put a big dent in its championship playoff prospects.

"They are a very, very classy outfit. They have a lot of talent from one to 23 ... so it is going to be an incredibly tough game for us.

"But you can look at that as a positive. To play rugby against some of the best players is an awesome opportunity.

"Those are the games you learn a lot from."

Te Tamaki is from Hamilton and honed his skills while at Hamilton Boys’ High School.

He was part of the first XV side which won the national top four tournament in 2013.

The team beat Saint Kentigern College 12-10. Bryn Gatland was another notable member of the Hamilton Boys’ side.

Following school, Te Tamaki carved out a niche as a sevens player.

But when he lost his spot in the sevens side he got an opportunity to move South to Invercargill and play for Southland.

Te Tamaki linked up with Pirates Old Boys and forced his way into the Stags line-up as an outside back.

Last season he shifted into centre when required and this year he has made the spot his own.

He has paired up with Ray Nu’u in the midfield to form a solid combination.

The Stags have freshened up their side with numerous changes.

Coach Dale MacLeod promised as much earlier in the week.

He is keen to test to depth of his squad and see how far the players have come in the past year.

Tasman lost 31-10 to Auckland last week and will be motivated to produce an improved performance.