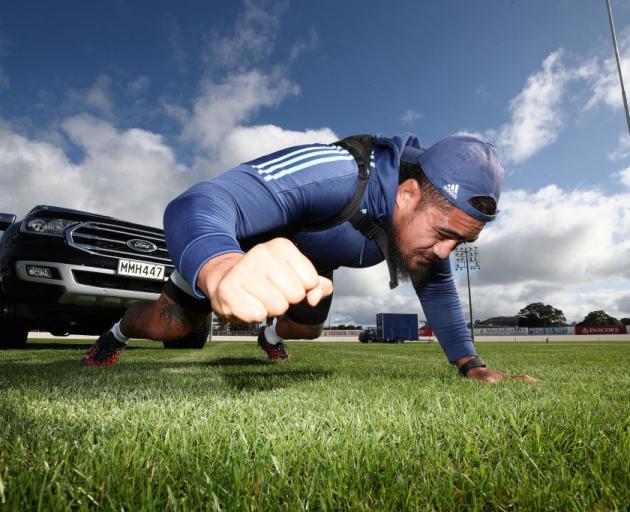 All Black and Blues prop Ofa Tu'ungafasi uses a harness to pull his SUV along, in lieu of using a scrum machine, while he trains in isolation at the Blues headquarters at Alexandra Park in Auckland. Super Rugby players such as Tu’ungafasi will be able to ramp up training knowing rugby can resume under Alert Level 2. PHOTO: GETTY IMAGES
Roll on Monday. Sport could be back as early as next week, albeit with plenty of bottles of hand sanitiser scattered about.

Under Covid-19 Alert Level 3 only a small handful of sports have been able to operate in New Zealand.

But that is set to change when the country eventually moves to Alert Level 2.

The Government will on Monday make a decision whether it does just that.

And under Alert Level 2 the way has been cleared for professional sport to resume.

New Zealand Rugby wasted no time in issuing its most upbeat press release in months.

"For our fans, our players and everyone involved in Investec Super Rugby, we are thrilled that the Sports Minister has given the green light for professional sport to resume at Level 2,” New Zealand Rugby chief executive Mark Robinson said.

"Both netball and rugby have been working closely with Government agencies on what training and playing at Level 2 could look like, and we are incredibly grateful for their support.”

"As soon as the country announces what date we move to Alert Level 2, we will be able to confirm what date Super Rugby will kick off.”

The format for the revamped Super Rugby Aotearoa has already been sorted.

The five New Zealand teams will play each other in home-and-away fixtures during a 10-week period. There will be two matches each weekend and they will all be played in closed stadiums.

The players would need three or fours weeks to be match-ready, which means the competition could resume as early as the first weekend in June.

Health and safety, though, would remain paramount, Robinson said.

"While we want to see our game up and running as soon as possible, we won’t make decisions that will put anyone at risk," he said.

Robinson said they were still working through the details of the Mitre 10 Cup and Farah Palmer Cup competitions, but they wanted to preserve the integrity of those competitions where they could.

A decision on the All Blacks Steinlager Series in July against Wales and Scotland will be made in the next fortnight.

Plans to prepare for the return of community rugby would begin when Alert Level 2 begins.

Netball New Zealand was also in an ebullient mood.

The ANZ Premiership will also be able to resume when the country moves into Alert Level 2 so long as the necessary public health measures were in place.

"We have always said we will take the Government’s lead on when it is safe to return and now our focus turns to ensuring we have a safe environment for that to happen.”

It is not just good news for Super Rugby and ANZ Premiership fans. Alert Level 2 expands the opportunities for competitive sport at a local level as well.

Strict hygiene and contact tracing protocols will need to be in place before sport can resume at that level, though.

Playgrounds, gyms, pools and public courts can reopen if they can meet the required health standards, while public conservation land will open to the public for walking, biking and hunting.

Oh, and we can all get a haircut again unless you are planning a Jack Goodhue-style mullet. They should be outlawed under any level.