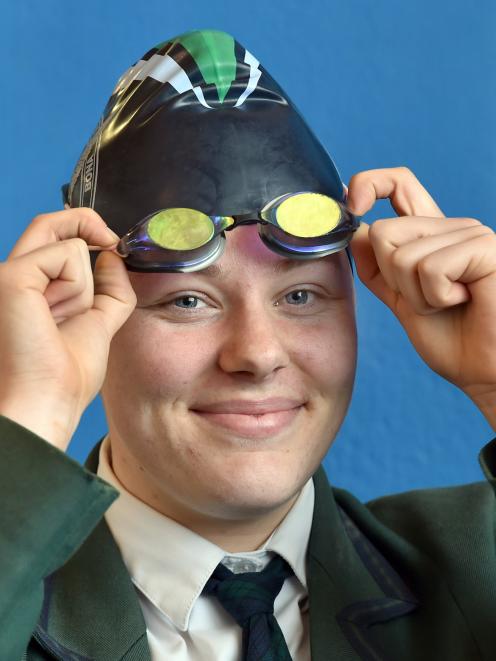 Columba College year 12 pupil Molly Law (17) was selected for the New Zealand bronze squad earlier this year. Photo: Peter McIntosh
It is not a surprise when Molly Law tells you she practically grew up in the water.

She is a regular among Otago's top performers at national swimming events.

She loves a freestyle sprint race.

It was the records - also personal bests - which pleased her the most.

However, an upcoming camp in January will rate among her swimming highlights.

She will head to Auckland to train with the New Zealand bronze squad.

That was a result of her gold medal-winning time of 26.58sec in the 50m freestyle in the girls 16 age grade at the national age group championships in April.

She had been to a similar camp two years ago, although it still came as a surprise.

''Then I heard the news and I was really excited.''

She was expecting to get plenty out of it, having found the last one she went to good.

''It was really eye-opening, learning better ways to recover and different skills to use in the water.''

It was in warmer waters that she first got into swimming.

Originally from Queenstown, she had two stints living much closer to the equator.

During those stints she had access to some quality coaching as well.

''When I was younger I lived in Bali and grew up in the water everyday.

''There I had an Olympic coach training me from a young age.''

While much of the focuses were the same, the environment was different.

That had contributed to her growing into a better swimmer.

''I trained without lane ropes and flags, just different experiences.

''The heat especially pushed me a lot more.

''I learnt how to push myself in different aspects of my training.''

After coming home to Queenstown, then going back to Bali, her family arrived in Dunedin for her to begin year 9 at Columba.

She trains nine times a week across six days, doubling on three of them.

That includes two sessions in the high performance sports gym.

It is a lot, but she does enjoy it - particularly the freestyle sprint races.

''It's fun, it's fast and you've got to do everything correct, otherwise you won't go your fastest, you can't just build from it.

''You have to nail your dive, your turn, your stroke count.''