Barty party under way as Ashleigh triumphs in Paris 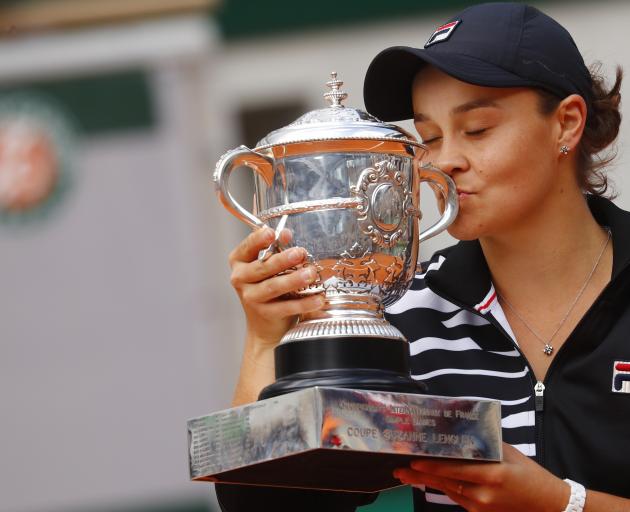 “It’s unbelievable... I played the perfect match today. I am so proud of myself and my whole team... it has been a crazy two weeks,” said Barty, the ninth different female champion in the last 10 grand slams.

“This is a special place for Australian players... it has been a magical two weeks.”

Not since Margaret Court’s triumph in Paris in 1973 has an Australian won the Coupe Suzanne Lenglen but this victory was in very little doubt from the moment the final began.

In a match-up where guile and artistry always trumped power, Barty was simply smarter throughout.

Producing angles so sharp they might have come with a health warning, the 23-year-old carved apart Vondrousova in the opening set, clinching it in half an hour.

While the match was no classic, those fans who had taken a break after the conclusion of the Dominic Thiem-Novak Djokovic men’s semi-final which had caused the women’s final to run more than an hour late, missed some of the more thoughtful tennis played on the Roland Garros clay this past fortnight.

Vondrousova, who herself has bamboozled a succession of opponents here, repeatedly found herself outfoxed by Barty, whose doubles excellence was always on display with her net-play and cleverly angled serving.

Barty, who returned to tennis in 2016 after a successful stint with the Brisbane Heat in Australian cricket’s Women’s Big Bash League, took nary a backward step, breaking instantly in the second set to deprive her 19-year-old opponent any foothold.

Cracking a stiff-armed, two-handed backhand, in the manner of Jim Courier, Barty was able to counter Vondrousova’s attempts to pull her wide with her loopy left-handed backhand, and the Czech rapidly ran out of ideas.

But the irrevocable damage had been done and when Barty slammed a short smash high into the stands it was all over and she raised her arms in triumph.

The victory lacked drama but lifts Barty to number two in the world - a feat last accomplished by an Australian woman in 1976 by Evonne Goolagong.

Considering her goal at the start of the year was to break into the world's top 10, it has been a remarkable rise.

"I think it's just been an amazing journey we've had over the last few years," she told reporters.

"I just tried to say to myself today on the court: 'I may never get this opportunity again, so enjoy it, try and grab it with both hands and go out there and smile'."

Australia was smiling with her.