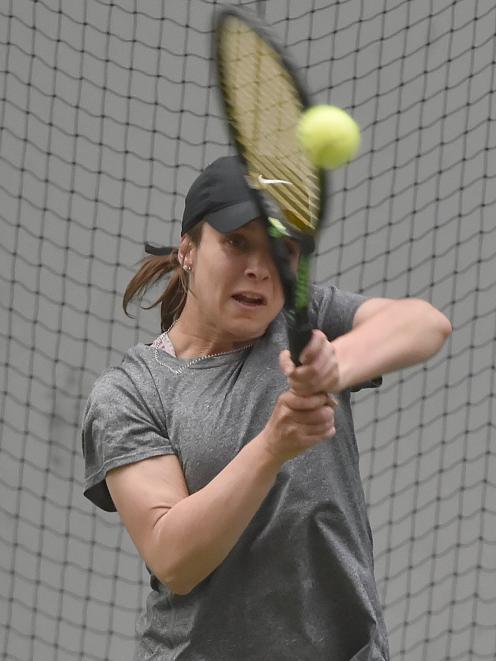 Balmacewen’s Jesse Stephenson seeks to return a ball at the Edgar Centre on Saturday. Photo: Gregor Richardson
Anderson's Bay has claimed a 9-0 sweep over Balmacewen.

The top women’s singles was the match of the tie, as Ayesha Horley (Anderson’s Bay) overcame Jessie Stevenson in three hard fought sets 4-6, 6-3, 6-2.

It was a match of entertaining rallies as they both prepared to represent Otago in the Southern Teams event in Queenstown next weekend.

Heike Cebulla (Anderson’s Bay) was also able to win the other women’s singles, edging Pippa Sheriff 7-5, 7-6(7). Cebulla was forced to fend off a couple of set points in the second set tie-break to hold on for victory.

The men’s singles were all won in straight sets by Anderson’s Bay as it was able to take advantage of a Balmacewen line-up missing some key players, while the doubles matches followed a similar path as Anderson’s Bay completed the sweep.

St Clair has escaped with a narrow 5-4 victory over Otago Boys’ High School. Otago representative Mitchell Sizemore (St Clair) has managed to get his season back on track, proving too much for Shaun Paringatai (Otago Boys’), winning 7-6(4), 6-2.

The players each  had one break of serve in the first set, but a couple of key serves found the mark in the tie-break for Sizemore and he was able to carry the momentum into the second set and run away with the victory. Paringatai was making his season debut for Otago Boys’.

In the No 1 women’s singles, Rileigh Fields was an impressive 6-2, 6-2 winner over Mackenzie Phillips (Otago Boys’) as she got revenge for the 2018 Otago Open final defeat to Phillips in March. Otago Boys’ was able to claim three out of the remaining four singles matches and this evened up the tie  at 3-3 going into the doubles.

This secured St Clair the overall victory  as it sought to move off the bottom of the table.