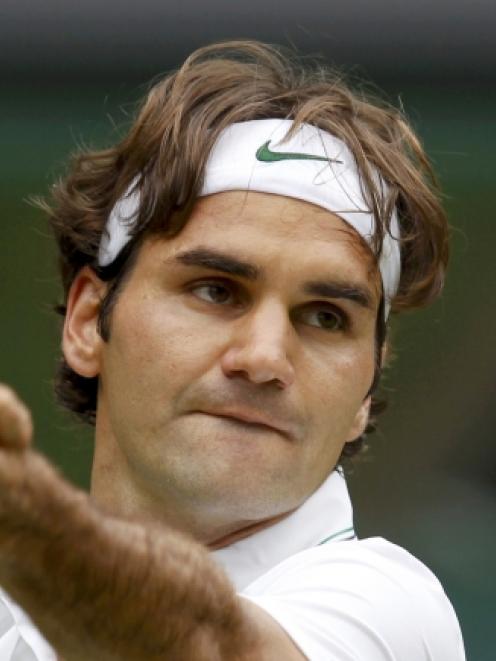 Roger Federer of Switzerland serves to Fabio Fognini of Italy during their men's singles match at Wimbledon in London. REUTERS/Suzanne Plunkett
Britain's Prince Charles made a rare, if fleeting, visit to Wimbledon but lingered long enough to see Roger Federer produce another regal performance on Centre Court and move serenely into the third round.

Swiss Federer, bidding for a record-equalling seventh men's singles title at the All England Club, aired his full repertoire of shots to outclass Fabio Fognini 6-1 6-3 6-2 in front of an appreciative Royal Box and 15,000 entranced fans.

Djokovic completed a 6-4 6-4 6-4 victory just before 10pm local time to set up a clash with 28th seed Radek Stepanek or German Benjamin Becker, one of several matches unfinished on a day of frustrating delays.

Women's top seed Maria Sharapova was poised to follow suit but bad light halted her progress against Tsvetana Pironkova when she led 7-6 3-1 having fended off set points on Court One.

Pironkova, Wimbledon semi-finalist in 2010, made an inspired start and Sharapova recovered from 2-0 and 5-2 down to take the first set 7-3 on the tiebreak.

The 2004 champion broke the Bulgarian early in the second set but was unhappy with the conditions and packed her designer handbag and headed for the locker room after convincing the umpire it was necessary to halt play.

Samantha Stosur became the highest seed to fall at the championships when the Australian was bundled out in the second round by Dutch player Arantxa Rus.

The fifth seed, the only player from the former tennis powerhouse to reach the second round, lost 6-2 0-6 6-4 in a wildly fluctuating match.

"It's a pretty woeful performance by all of us, but it's not through lack of trying or not wanting to be here or anything like that," Stosur said of Australia's failure to have a player in the third round of the singles for the first time since 1939.

She was not the only big name to fall in the women's singles.

Seventh seed Caroline Wozniacki, who began the year as world No. 1, did not even make it past the first round after losing 5-7 7-6 6-4 to Austria's Tamira Paszek despite having two match points in a contest spanning two days.

"(It) really sucks when you lose," was the verdict of the Dane who has made a habit of it this year while sliding down to seventh in the rankings.

Home fans who joined the early-morning queues snaking across the golf course opposite the grounds, were treated to early British cheer when Heather Watson reached the third round of the women's singles by beating American Jamie Lee Hampton.

Andy Murray will continue the quest for a long-awaited British grand slam winner in second-round action on Thursday against giant Croatian Ivo Karlovic.

Federer bowed to the heir to the throne before his match and Charles and his wife Camilla gave the 30-year-old maestro a standing ovation after he thrashed Fognini.

"We are thrilled for the tennis family that they came to watch today," Federer said after a stress-free victory that resembled a royal procession at times.

The languid Fognini played his part in proceedings in the second and third sets but his body language was that of a man just making up the numbers as Federer treated the crowd to some jewel-encrusted tennis in a match that flashed by in 74 minutes.

"I didn't think it was that easy a match," a modest Federer said. "I really tried to focus hard and made sure I played sort of a clean match, which I was able to do again today."

Federer, who last won the title in 2009, will face Frenchman Julien Benneteau in the third round.

Several first-round matches had to be completed on Wednesday after rain and bad light ended play early the previous evening.

Three-time runner-up Andy Roddick beat Briton Jamie Baker 7-6 6-4 7-5 and will return on Thursday to play Germany's Bjorn Phau in the second round.

"They tell you to go play, you go play. You can't really stress about what's out of your control. I've done it a million times," Roddick said of the stop-start nature of tennis on Wimbledon's lawns.