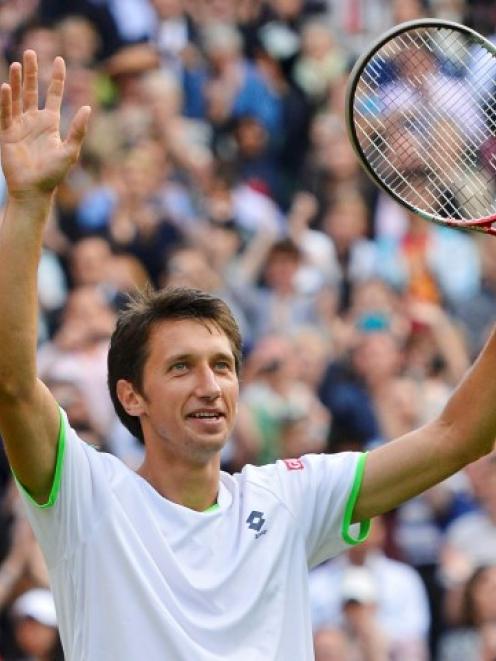 The last time Federer, who has won a record 17 grand slam titles, including seven gilded Challenge Cups, failed to reach at least the last eight was in the 2004 French Open.

But on day three of the championships an opponent ranked a lowly 116th in the world launched outrageous winners to bring Federer to his knees and condemn the Swiss to his earliest Wimbledon exit since a first-round loss in 2002.

Federer's ego certainly took a battering on a day that started off routinely for the Swiss great as he nonchalantly ambled into the All England Club holding the hands of his twin daughters Myla Rose & Charlene Riva.

Facing an opponent who had never beaten a top 15 player would have rung few alarm bells but at 8.15 pm local time shock waves reverberated around the grounds when he slapped a backhand wide to leave Stakhovsky rolling in the grass in triumph.

Former champion Sharapova fought until the bitter end against Portuguese qualifier Michelle Larcher de Brito, despite needing 10 minutes of treatment after a painful fall on Court Two, but lost 6-3 6-4 to a player ranked 131 in the world.

Second seed Victoria Azarenka did not even take to the court as the knee injury she suffered in a first-round fall made it impossible for her to take on Italy's Flavia Pennetta.

The medical bulletins came thick and fast from the moment stricken American marathon man John Isner, who needed 183 games to beat Nicolas Mahut in 2010, survived only two before his knee buckled and he quit against Frenchman Adrian Mannarino.

Next it was Belgian man-of-the-moment Steve Darcis whose challenge began with a bang by beating Rafa Nadal but ended with a whimper as he withdrew before his second-round match against Poland's Lukasz Kubot with a shoulder injury.

"Wipe-out Wednesday" was unrelenting and Frenchman Jo-Wilfried Tsonga was the next victim, the fifth seed retiring with knee trouble while trailing two sets to one against Latvian Ernests Gulbis.

Kazakh Yaraslava Shvedova handed 2011 Wimbledon women's champion Petra Kvitova a walkover, meaning the Czech eighth seed is the highest-ranked player left in the rubble of the bottom half of the draw.

Shvedova's no-show meant it was the worst day for withdrawals and retirements at a grand slam tournament, surpassing the five on the opening day here last year.

It inevitably led to questions about the condition of grass and during her injury time-out Sharapova was overheard to describe the Court Two surface as "dangerous".

"I don't think I've ever fallen three times in a match before in my career, so that was a little strange," the 2004 champion, who saved four match points, told reporters.

"I noticed a few more players falling than usual. Understandably the first couple of days, they're always a bit (slippery), but I don't think I've seen as much as I have maybe in the last few years."

Amid all the thrills and spills home favourite Andy Murray kept a cool head to progress unscathed to the third round with an unremarkable three-set victory over Taiwan's Lu Yen-Hsun.

Second seed Murray, whose broad shoulders carry hopes of a first British men's singles winner since 1936, started slowly but took control to win 6-3 6-3 7-5 and set up a third round clash with Spaniard Tommy Robredo.

Murray's path looks a lot less tangled with Nadal's first-round defeat and Tsonga's demise and "Murray Mania" will move up a level in the coming days as the draw opens up.

After losing the second set by the same score he required a strapping on his left knee and after losing the third set the Frenchman threw in the towel.

While pleased to be in the third round for the first time, Gulbis said he would have preferred a fight to the finish.

"Grand slam should be five sets, blood, fight five sets all the way until the end, until somebody is dead," he said.

After Wednesday's woes 10 singles players have withdrawn or retired from the tournament in the first three days.