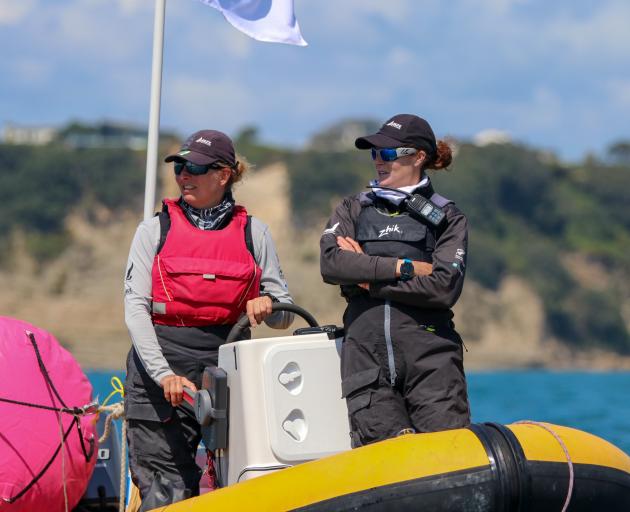 Dunedin sailor Jenny Armstrong (left) with Rosie Chapman, the woman she is replacing in a Yachting New Zealand role. PHOTO: YACHTING NEW ZEALAND
She has won Olympic gold, coached sailors to youth world titles and overseen a revival of activity at her local club.

Now, Dunedin sailor Jenny Armstrong will combine all of her knowledge and experiences when she joins Yachting New Zealand.

Armstrong yesterday started as women’s sailing manager and Laser Radial programme manager, taking over from Rosie Chapman, who is relocating to the United States with her partner after a couple of years in the role.

Along with a high-performance focus, Armstrong will be tasked with the continued implementation of Yachting New Zealand’s Women and Girls in Sailing strategy, which aims to attract, develop and retain more females in sailing, inspire future champions and advance diversity and equal opportunities across all levels of the sport.

The former Olympic gold medallist will also oversee the Laser Radial programme, and next month Annabelle Rennie-Younger and Olivia Christie will return to international competition at the world championships in Oman.

‘‘I’m really excited to get stuck into helping with the Women and Girls in Sailing strategy and help females get set up in the sport and helping more to compete at the highest level,’’ Armstrong said.

‘‘Rosie has done a really good job to set this up and it’s now about developing it even further.

‘‘I have the experience. I know what it takes to make it and that gets you a long way with athletes when building trust because you are talking about real-life experiences. That gets you a head start.’’

Armstrong’s route to the top is unlike most.

She finished fourth in the Europe dinghy for New Zealand at the 1992 Barcelona Olympics before switching allegiance to Australia and winning gold with Belinda Stowell in the women’s 470 at the 2000 Sydney Olympics.

She has also coached the likes of Seb Menzies and Blake McGlashan to gold at the youth sailing world championships, and has played a leading hand with sailing in Dunedin since returning to her roots in 2016.

Armstrong will remain in Dunedin with the aim of spending one week every month in Auckland once the city’s borders reopen.

‘‘I will ensure the regions and South Island have a loud voice because that probably hasn’t always been the case,’’ she said.

‘‘Hopefully, I can be someone people feel comfortable talking to, whether it’s for guidance or support.’’

Armstrong will inevitably work the boat park at this weekend’s Laser Radial South Island championships in Picton, emphasising the pathways available to both young females and males, but will also go there to build on her overall win in the Radial masters division at this year’s Laser national championships.

She will spend next week alongside some of the country’s top female coaches from various sports involved in High Performance Sport New Zealand’s women in high performance sport project, Te Hapaitanga, a national programme to expand the female coaching talent pool.

‘‘The programme has been really interesting,’’ Armstrong said.

‘‘I’m learning a lot and it has given me a lot more confidence to say what I think. It will be nice to be able to apply some of what I have learnt in this role.’’

‘‘It’s great to have someone of Jenny’s calibre taking over this important role and it feels good having a strong South Island connection,’’ Stewart said.