0 Comments
The quirky hobby of steampunk put its unusual pastimes on display at a market in Christchurch on Saturday. 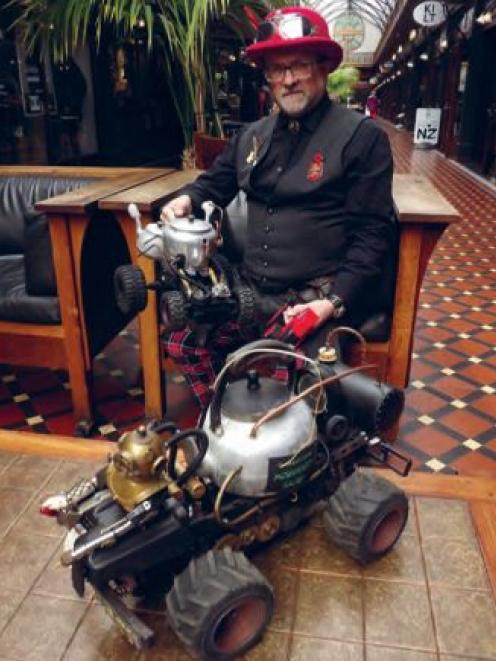 Pot builder and racer David Sawyer with two of the radio-controlled monsterpots he has created. Photo: Supplied

The city's steampunk community pressed ahead with a ‘Keep Calm and Steampunk On’ market after Covid concerns cancelled the annual festival in Oamaru again this year.

The Christchurch event included displays of teapot racing and monsterpot racing where radio-controlled vehicles fitted out as teapots with added steampunk themes compete around obstacle courses.

In one event, the teapots had to negotiate a course as fast as possible, but in the larger and more powerful version, the monsterpots have to perform stunts, such as jumps around the obstacles in a two-minute period.

Belly-dancing displays and a clairvoyant demonstration also took place at the market in St Martins School Hall on Albert Tce, while stallholders offered the distinctive costumes and embellishments that steampunks enjoy.

The market took place from 10am to 4pm and mask-wearing in the hall was mandatory. It was hailed as a success by Steampunk Christchurch.

"To everyone who attended the Keep Calm & Steampunk On market ... thank you so much. You all made it a success. Massive round of applause to the organisers," a spokesperson said.

"Hope to see you at the next event!"

Steampunk thinking is that all hats need goggles, gowns need corsets or bustles and decorations, and households need eye catching ornaments and antiques.

Jewellery, light sabres, walking sticks, and clothing were on sale at the event.

Although the Oamaru festival – a yearly high point on the steampunk calendar – has been called off, some steampunks are planning to venture south anyway at Queen’s Birthday weekend to make their own events.

The market may be a chance for them to finish costumes that have taken months or years to create, or for others to find interesting items.

The hobby, with its oddball costumes, is a version of Victorian science fiction – how the Victorian world might have seen a steampowered future and the characters who inhabit it.