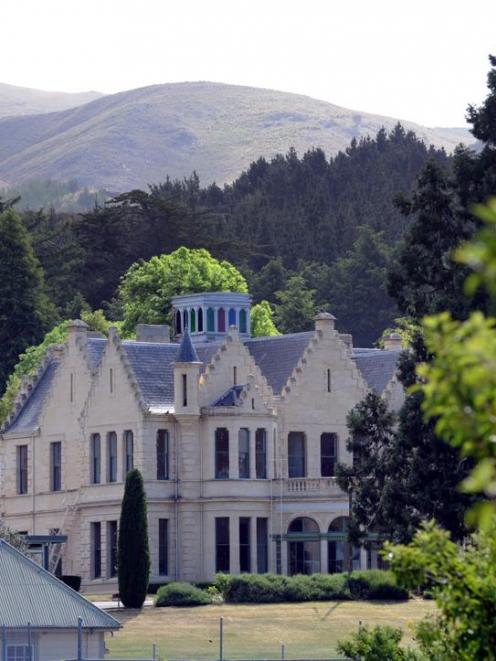 The baronial mansion built for Robert Campbell is now the centrepiece of Campbell Park Estate. Photo by Peter McIntosh.
When land baron Robert Campbell married in 1868, he decided the attractive two-storey homestead on Otekaieke Station was not big enough to live in.

So he took his new bride, Emma Hawdon, back to his English home, Buscot Park, and dispatched Scottish tradesmen to build the couple's new house.

Undoubtedly the most impressive of North Otago's grand homes, Campbell's 35-room limestone baronial mansion is often referred to as a castle.

A few kilometres down a quiet, country road off State Highway 83, between Duntroon and Kurow, and now the centrepiece of Campbell Park Estate, it was the first house designed by a New Zealand-born architect, John Burnside, who worked for Mason and Wales.

It was also the first time a model had been made of a building prior to it being built It was sent to Australia for viewing and displayed at the Ballarat Industrial Exhibition and the Sydney International Exhibition in 1879.

The homestead deemed too small by Campbell became the manager's house and is now home to Michael and Wendy Bayley.

It had been built for another important figure in early North Otago history, William Heywood Dansey, after whom the Dansey Pass, linking North and Central Otago, is named.

The Otekaieke run - first licensed to Samuel Helier Pike in 1854 and later sold to John Parkin Taylor - was bought by Dansey in 1857.

He went up to Port Nicholson (now Wellington) and carried his swag over the Rimutakas in a search for Wairarapa land.

He crossed back to Nelson and, in 1855, accompanied David Monro - a future knight and Speaker of the House of Representatives - on his ride from Nelson to South Canterbury.

The intention of the ride was to find out what was being done in the Waitaki Valley.

They turned back after reaching Pareora.

But by the next year, Dansey was in the Waitaki Valley, from which he explored into the Maniototo Plain.

Dansey built a cottage on Otekaieke, one of the first recorded buildings in North Otago and which still stands in the grounds of Campbell Park.

The graves of his two young children, who died from eating either poisonous tutu or deadly nightshade berries, are on the hill above the cottage.

Dansey later moved to Oamaru where he was a collector for the Oamaru Borough Council.

He was believed to be the first man in the town to receive the pension.

Robert Campbell, who took up the Otekaieke holding in the early 1860s, was born in 1843. 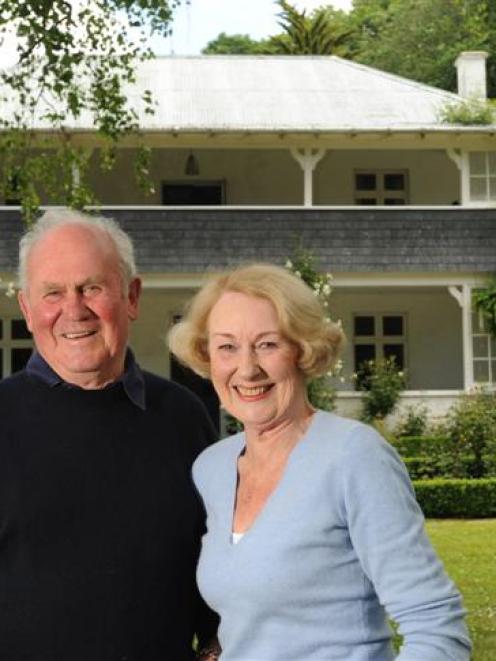 Michael and Wendy Bayley in the grounds of their historic home at Otekaieke Station. Photo by Peter McIntosh.
His father, also Robert Campbell, was from a wealthy mercantile family.

The younger Campbell, fresh from Eton, sailed firstly to Australia, where his uncle had a large holding in what is now the Duntroon Military College.

The Campbells made their fortune as merchants in India and Australia.

Limestone from the quarry at Otekaieke was used as ballast in ships making the return journey from New Zealand to Australia and some of it was used in Circular Quay in Sydney.

When Robert Campbell decided to settle in New Zealand, he bought up large tracts of land.

Otekaieke was only a small part of what he owned.

He also acquired Station Peak, across the Waitaki River near Hakataramea, the mighty Benmore Station near Omarama and Galloway in Central Otago.

The sprawling Otekaieke Station stretched virtually from Kurow to the Maerewhenua River at Duntroon, running back over to the Dansey Pass.

Money was no object to Campbell who imported the very best merino ewes from Victoria, Australia, and rambouillet (Spanish merino) rams, along with quality cattle, to stock Otekaieke and his other properties.

He employed a series of managers.

A prominent figure in the community, Campbell was a member of the House of Representatives and also chairman of the Waitaki County Council.

He and his wife were great entertainers and noted for their hospitality in their massive home.

They had no children. 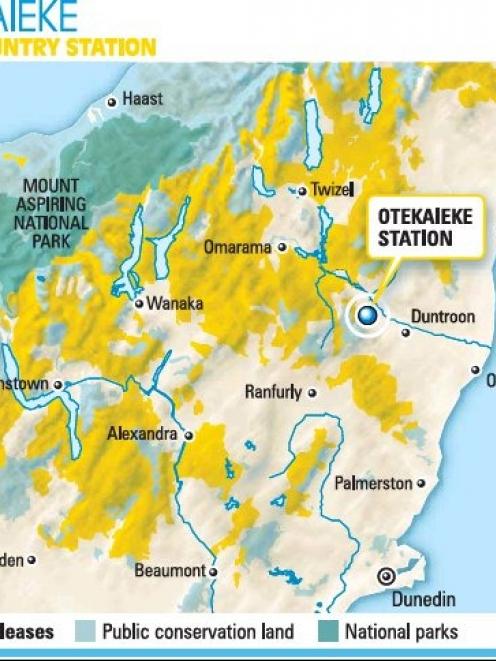 Both are buried in Dunedin's Northern Cemetery.

Otekaieke Station passed to Campbell's nephew, Robin Campbell, a military man who was not particularly interested in farming.

He retired to Christchurch and, in 1908, sold the freehold title back to the Government.

The Government subdivided some of the lower country, putting it up for ballot.

They were small farms and not economic, and those applying for ballots were mainly employees who worked on the property.

One hundred and twenty hectares was retained and a special school for boys opened in 1908.

Originally, only Campbell's mansion was used but eventually a manager's house was built and trees were felled to build cottages for the boys.

It closed in 1987 and the property is now in private ownership.

Dickson Jardine, who was managing Otekaieke at the time of its sale in 1908, had the pick of the station, and he chose the homestead block and the run which stretched into Dansey Pass.

He had previously worked as a shepherd for the Campbell family at Benmore Station.

Jardine ran Otekaieke until 1913, when an unfortunate mishap forced the property's sale.

His wife was at home with a young child when a boy from the village turned up and frightened her with an axe.

It was widely reputed that she was found collapsed the next day and her hair had turned white.

She refused to stay in the house on her own and the property was put on the market.

It was sold to William and Jeanie Munro, who farmed Ben Lomond, a nearby hill property.

Remembered by her grand-daughter, Wendy Bayley, as "tiny, strong and adorable", she had no family and the station passed to her foster son, John George McDonald, whose parents had also died from influenza.

He died in the late 1930s and ownership then moved to his son, the late Robin McDonald, and daughter Wendy.

Wendy, a music teacher, and her husband, Michael Bayley, bought Robin McDonald's share of Otekaieke when he decided to move north, taking over completely in 1960.

They then set about freeholding the station.

Station ownership was a "baptism of fire" for a man whose background was in journalism, not agriculture, Mr Bayley readily acknowledged.

He had grown up at Edendale in Southland and his journalism career included working for the Otago Daily Times and Evening Star.

He admitted it was "bloody hard" moving to Otekaieke, given he had no knowledge of farming, but he sought advice from the best in their respective fields, at the same time saying not to be offended if he did not take it "but it provided a solid foundation to build from".

The couple have two children - Julia and Tony - and Otekaieke Station is now run by Tony Bayley and his partner Joanna Dalton.

Although their son was born and raised on a high country property and accustomed to the lifestyle, it was still "hard, hard work" - physically tough and demanding, Mrs Bayley said.

And while the monetary reward was not great, there were other "amazing rewards" from living on such a property, she said.

While Mr and Mrs Bayley are no longer involved in the day-to-day running of Otekaieke Station, the vast property - now covering about 9700ha - is still home.

They live in their elegant two-storey home surrounded by a magnificent garden where some of the towering trees around the perimeter date back 150 years.

The garden - covering about 1.2ha - has changed enormously from when Mrs Bayley was a child and remembered a formal Victorian-Edwardian style.

Then, gardeners were employed to tend to it.

Now the responsibility was hers, but it was a lovely garden to both live and walk in, she said.

And they enjoy being so close to their two young grand-daughters, Zoe (6) and Jessica (4), who are now fifth-generation to live on Otekaieke Station.

Inheriting a love of the farming lifestyle, the sisters are mad about animals.

Their three elder cousins, William, Edward and Alexandra, also love the opportunity to visit the station.

There have been "huge" developments on the property over the years, thanks largely to aerial topdressing, sub-division of hill blocks and deer fencing, particularly since Tony and Joanna took over.

It had been run as a grazing property for so long that it was not until after the Bayleys' took over, that they started "making it really tick".

That work has been continued by Tony and Joanna.

Otekaieke, stocked with merino sheep, beef cattle and deer, is not an easy place to run because of the large distances involved.

Four-wheel-drive tracks were established only in the mid-1960s.

Before that, horses were used up a bridle track or it required a 54km drive on public roads to reach the Dansey Pass run.

Mrs Bayley remembered the musterers heading away with eggs packed carefully in sawdust-filled tins which, in turn, went into kerosene boxes on the pack-saddles on the horses.

They would not return home until the job was done and there was no way of communicating with them.

She would never know when they were coming back - a far cry from today's modern communication.

In the past, community life was a big part of living in the area.

"You contributed in lots of ways, you became very much part of an active and busy community, whereas today everything is further apart" - and the school next-door was a hub of community activity.

A few years before the school closed, the Department of Education and the Ministry of Works deemed Robert Campbell's mansion to be an earthquake risk and demolition was planned.

"We were told the bulldozers were ready to come in. Urgent action was required," Mrs Bayley recalled.

She immediately contacted the local Member of Parliament, Jonathan Elworthy, and when a telegram arrived a few days later following a Cabinet meeting, saying the building had to be retained, it was a "huge relief", she said.

Mrs Bayley described her family's role as land-owners as only custodians for another generation.

It made her cross to see huge areas of land set aside for conservation purposes and neglected, when farmers were "really the best conservationists".

Despite all their years on Otekaieke Station, the drama of the country never ceased to amaze the couple.

"You can hear the quietness. It's very special," Mr Bayley said.