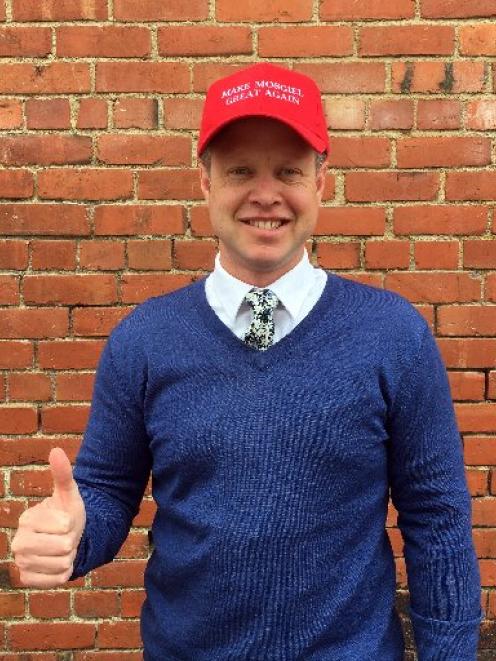 A campaign slogan has been hijacked to raise funds to get an aquatic facility in Mosgiel.The campaign slogan ``Make America Great Again'' was used by United States President Donald Trump last year.

During the election campaign, the Republican candidate wore a red cap with the slogan, as he vowed to have a wall built between the US and Mexico.

Now a Mosgiel man has recycled the slogan.

Campbell and Sons managing director Clark Campbell, of Mosgiel, said he was the master of ceremonies at his youngest brother Adam's wedding earlier this year.

``I needed a few jokes to introduce people who were speaking.''

The speakers included his father, Bob Campbell, the fundraising chairman for the Taieri Community Facilities Trust.

The trust is raising funds to have an aquatic facility built in Mosgiel.

He introduced his father and handed him a red cap to wear during his speech.

The caps had the slogan: ``Make Mosgiel Great Again''.

``Because he's going to make Mosgiel great again by getting us a pool,'' Mr Campbell said.

The ``dig'' at his father continued when he got another 10 of the caps made for audience members to wear when his father gave a speech at a networking breakfast in Mosgiel.

Pool supporter Peter Chin continued the joke by selling about 10 caps to residents at Brooklands Retirement Village after making a speech about the fundraising effort.

The Campbell family was supporting the trust because it was time to upgrade the pool and release pressure from Moana Pool, Clark Campbell said.

The community needed to raise $7.5million by March, so the fundraising had to ramp up.