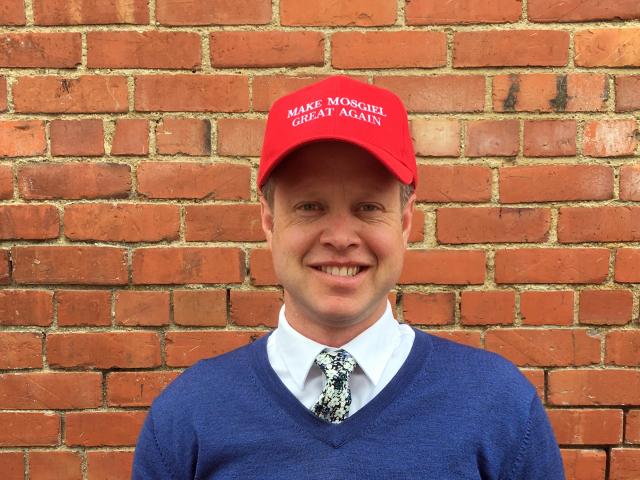 Mosgiel is no stranger to taking inspiration from Americana. First it was the Hollywood sign and now its Donald Trump's campaign slogan.

The Mosgiel Pool is set to go to the dogs next month, when the facility will have a canine swimming day.

A tennis tournament, a celebrity cook-off, a quiz night and massive party in the park will feature in next year's Festival of the Plain.

In the final in a series of profiles of the new Mosgiel-Taieri community board, Sarah Nitis (nee Davie) tells us a bit about herself. The sixth board member, Blackie Catlow, declined to submit a profile.
It is hoped ground will be broken early next year on the first stage of a project aiming to provide a cycle trail link between Mosgiel and Dunedin.

A last-minute decision to head to Christchurch for a football tournament paid off for a Mosgiel under-19 football side.

With the mystery of Mosgiel's population now solved, it is time to update the suburb's welcome sign, Mosgiel-Taieri community board member Bill Feather says.

A Mosgiel man has offered to donate a piece of land for a new pool as a way of giving something back to the community.

Mosgiel families with children under the age of 5 are being sought this month for their opinions.

The Mosgiel Rotary Club will next month celebrate 75 years of service to the town.
Mosgiel's air quality improved slightly during winter but not enough for the town to rest on its laurels, Otago Regional Council air quality scientist Deborah Mills says.

Mosgiel and surrounds may still be Dunedin's fastest-growing area, but growth is slowing.
Police have a simple message to the burglars who targeted a Mosgiel work site on Saturday.

Mosgiel-Taieri's newest representative on the Dunedin City Council had just come inside from feeding calves when he heard the news.
A free trial Aqua Zumba class at the Mosgiel Pool next Monday will be dedicated to past participants who have had breast cancer, and aims to raise funds for the Breast Cancer Foundation.

Singing keeps you young at heart, Dunedin Star Singers life member Madelene Barkman says.
Police want to hear from anyone with information about a recent spate of vandalism in Mosgiel.
Installation of ultrafast broadband infrastructure is expected to be complete in the Mosgiel area by 2016.

Mosgiel has a reputation for being a couple of degrees warmer than Dunedin, but now Reid Park Kindergarten children are attempting to grow its reputation as one of the sunniest towns in New Zealand.