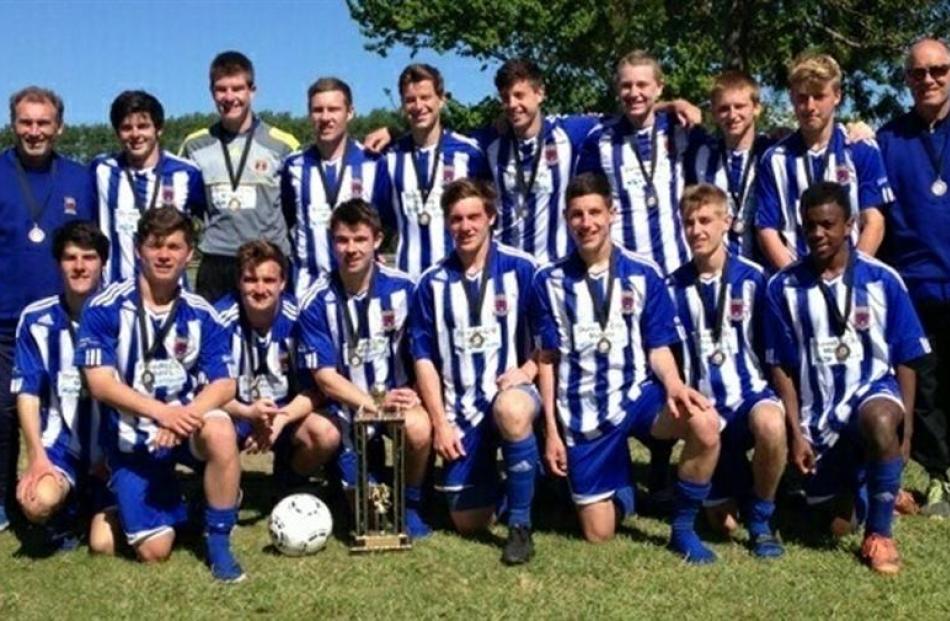 The Mosgiel under-19 football team, which won an invitational tournament in Christchurch at Labour Weekend. Photo supplied.

A last-minute decision to head to Christchurch for a football tournament paid off for a Mosgiel under-19 football side.

The side won the tournament in its first time at the event, although it just squeezed home in one of the matches.

Coach Mike McGarry said the tournament had been running for the past six years.

With quite a few promising young players in Mosgiel, he said, the club made the decision to enter, though it was a late call.

Thanks to some funding from the Bendigo Valley Sports and Charity Foundation, the team journeyed to Christchurch for the three-day tournament.

All 16 players came from the Mosgiel club, although the team did have the option of bringing in up to three guest players.

In the quarterfinal against Southland, Mosgiel was up 2-0 but conceded two goals, one in the final minute to draw 2-2.

The match went straight to penalties, with Mosgiel winning 9-8 in what became something of a marathon decider. Goalkeeper Riley Bungard made a couple of crucial saves to get his side through.

In the semifinal, Mosgiel faced the host of the tournament, Coastal Spirit, which had won the tournament over the past couple of years.

But Mosgiel put on its best performance of the event and won 4-0.

In the final, it took on Nomads, again of Christchurch, and won 2-0 with a goal in each half.

James McGarry (15) scored both the goals in the final, and was the leading goalscorer for the Mosgiel side with seven.

He is based at the Asia-Pacific Football Academy in Lincoln, but still has ties with Mosgiel.

Mike McGarry said it was an excellent all-round performance from the Mosgiel side, which showed the ability throughout the team.

Only two players from the side would be too old for the team next year.

McGarry said the team aimed to return to Christchurch next year to defend the title.