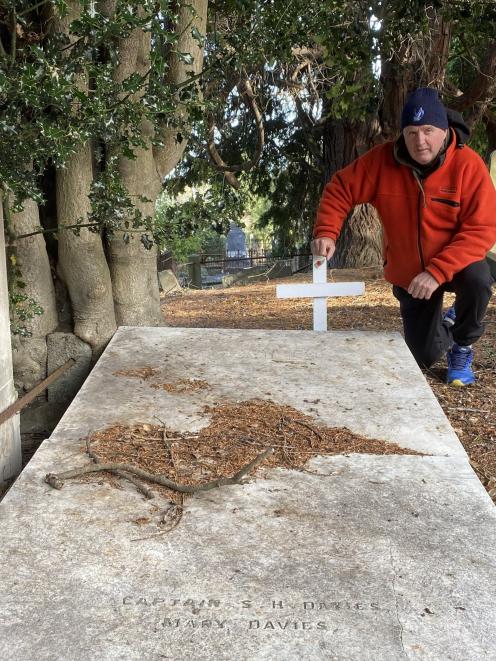 Military historian Peter Trevathan beside the grave of Captain Sydney Herbert Davies, his wife Mary and other family members, in the Northern Cemetery. PHOTO: BRENDA HARWOOD
A quiet, obscure grave in Dunedin’s Northern Cemetery is the last resting place of a soldier who fought in the Crimean War and the American Civil War.

Military historian Peter Trevathan, a member of the Otago Military History Group, is keen to restore the grave of Captain Sydney Herbert Davies, his wife Mary and other family members.

He is also researching Capt Davies’ military background and exploits, in order to create an information panel to be placed at the grave.

So far, research has shown Capt Davies fought in the Crimean War in the 1850s, and was in the Royal Navy before joining the 16th Regiment of Foot — Bedfordshire Regiment and going to Canada.

He later resigned from the British Army and joined the Confederate Army as a drill instructor during the American Civil War in the 1860s.

He fought in the famous battle of Gettysburg in 1863, including taking part in the failed Pickett’s Charge assault, which ended the battle.

Eventually arriving in New Zealand, he became a constable in the Armed Constabulary, rising through the ranks.

He died in 1915, at the age of 77, and is buried with six other family members in the Northern Cemetery.

"There were quite a few New Zealanders who joined the Confederate Army and the Union Navy," Mr Trevathan said.

"But Davies is one of only two American Civil War veterans we have buried here in Dunedin."

To help get the project under way, Mr Trevathan is seeking descendants of the Davies family in the hope of gathering further information and getting their approval for the restoration project.

"It would be great to hear any family stories they have, and to get their support," he said.

The Davies grave restoration and information panel is one of four such projects the group is working on at present, which include the grave of Victoria Cross winner Duncan Gordon Boyes in the Southern Cemetery.

A recent project to restore the grave of Sergeant Major John Bevin, and install an information board designed by Hilda Bennett, had been a great success, Mr Trevathan said.

Descendants of the Davies family are invited to contact the Otago Military History Group by phoning Christine on 022036-9165.