Not ready to say goodbye to train 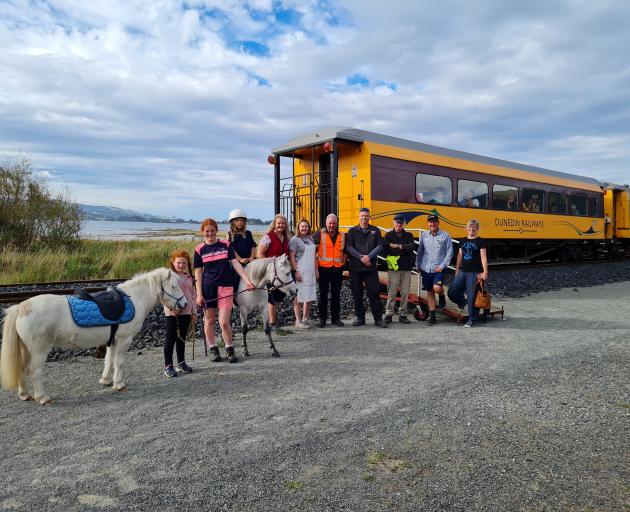 They plan to repeat their message for councillors during the public forum at the Dunedin City Council meeting on April 13, where the future of Dunedin Railways is to be discussed.

The impact of Covid-19 on tourism operations forced the council to put Dunedin Railways into hibernation in April last year.

Dunedin Venues Management Ltd had reached out to Waitati-Blueskin Bay businesses just before Christmas about the Trains Not Planes campaign, asking them to co-ordinate hosting passengers during a two-hour stopover on Sunday afternoons, Ms Brown said.

"We had to pull together quickly to create a two-hour discovery experience for passengers in Waitati, but it has been really worth it."

More than 3200 people had taken the train to Waitati, enjoying local shops, and taking the Headfirst Travel Dunedin bus to Orokonui Ecosanctuary and Arc Brewing Co.

"We had people from all over New Zealand, some of whom had flown to Dunedin especially to do the train trip," Ms Brown said.

"It was great for us, and they enjoyed it as a nostalgia thing, and also because there were so many things to do here."

Harvey Street Merchant co-owners Mel Borrell and Matt Sumpter had been grateful for the "wonderful" support from passengers on the Seasider train.

They founded the business in February last year, and described the exposure from the train visits as "incredible"; it had enabled them to employ two local young people on a part-time basis.

"One family have caught the train four times, as they loved it so much, and have been able to do a different activity on each trip," Ms Borrell said.

The train trips had been well co-ordinated by DVML and Dunedin Railways staff had been excellent to work with.

"We would like to see the city council support the continuation of this venture, as it has had such a positive impact on the businesses and community — it has brought us all together."

Orokonui Ecosanctuary general manager Amanda Symon said the organisation had benefited from the train trips, and that any opportunities to generate revenue were vitally important given the impact of the Covid-19 pandemic.

Arc Brewing Co co-owner Jono Walker said customers had really enjoyed the experience of taking the train and bus to the brewery.

It would be ideal for the Waitati businesses, and for Dunedin Railways, if the trains could continue through the winter — perhaps on a monthly basis, Ms Brown said .

"The trips have sold very well, many have been sold out, so it has been proven that it can work."

DCHL and DVML would report to councillors on options for the future of Dunedin Railways Ltd at the next Council meeting on April 13, and would have more to say after that.

Show some foresight folks and keep these trains going. People will use them. I did the scenic rail trip from Dunedin to Oamaru and return yesterday and it was totally awesome, first time on a train for me and I loved it. The scenery is very different and the train has all the comforts anyone could possibly want. For $54 I had the best day I've had in years and I am a local doing a local tourist thing. The train was sold out and they had to add more carriages so doesn't that say something about the need to continue these sorts of excursions.