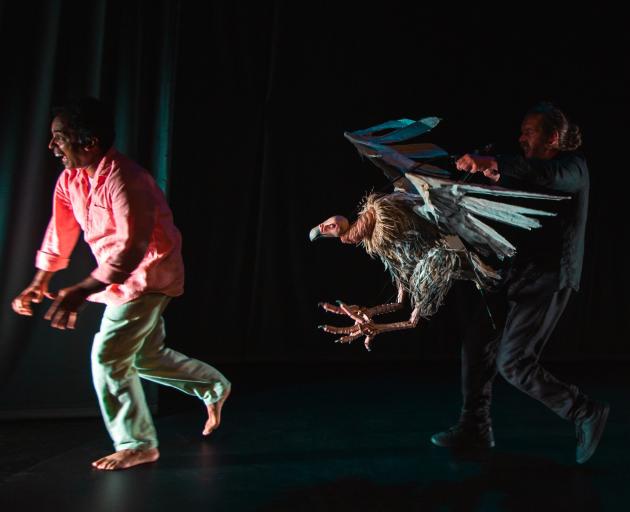 The show, which was scheduled for this Friday night at the Regent Theatre has had to be postponed due to the lockdown, and is rescheduled to October 13.

The four-strong Indian Ink touring party was halfway through an 11-date tour, and had completed seven shows in the North Island before lockdown.

‘‘We had great responses from audiences, and were really excited to come down south with the show,’’ Rajan said.

‘‘It’s OK though, because we have been able to reschedule nearly all our dates, sadly apart from Oamaru.’’

Written by Rajan and Justin Lewis, Paradise or the Impermanence of Ice Cream follows Indian Ink’s tried and tested method of ‘‘the serious laugh’’ — opening the audience’s mouths with laughter, so something more serious and thought provoking can be slipped in.

‘‘Our lives are but melting ice cream and the transition between this world and the next is never easy, but it’s made profoundly more difficult when your guide is a vulture,’’ Rajan said.

A man trying desperately to avoid death is flung between limbo and his past where a rebellious young woman from Mumbai’s enigmatic Parsi community — a people whose faith is entwined with the vulture — holds the key that may be able to deliver him to paradise.

Rajan channels seven characters, while weaving the afterlife and a dash of Bollywood disco into the real-life mystery of India’s vanishing vultures.

He is joined on stage by puppet designer, maker and puppeteer Jon Coddington, who brings to life a beautiful vulture puppet.