Verlaines to release on vinyl

The Verlaines songwriter and retired music lecturer Dr Graeme Downes with the board of Dunedin Sound songs he orchestrated for the Tally Ho! concert. PHOTOS: BRENDA HARWOOD
Dunedin music veterans The Verlaines will release their first new music on vinyl in nearly three decades this weekend — a limited edition pressing of 10th album Dunedin Spleen.

Presented for Record Store Day 2020, October 24, the release is a double album on coloured vinyl, presented in a gatefold sleeve.

The genesis of Dunedin Spleen dates back to shortly after The Verlaines’ ninth album, Untimely Meditations, in February 2012, during a prolific songwriting period for band founder Graeme Downes.

By the end of 2013, Downes had completed enough material for two albums, setting lyrics to music using notation-playback software.

At Easter, 2014, after laying down basic tracks, the band was confident they had enough material for a double album — more than 20 songs making 90-plus minutes of music. 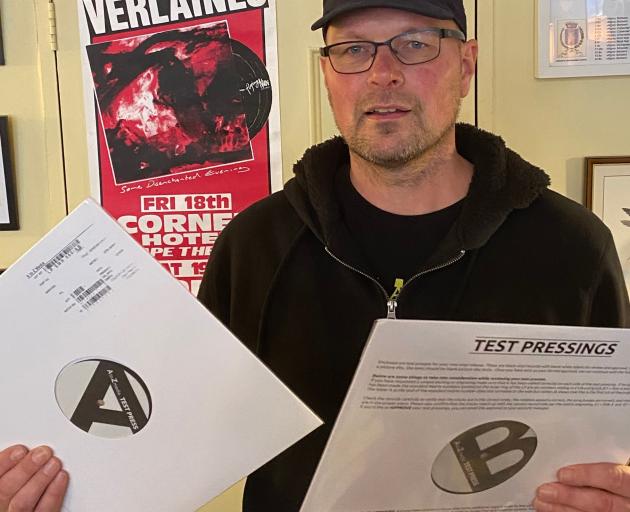 It was about this time, Downes and the late Roy Colbert discussed the idea to hold a concert of classic Dunedin songs fleshed out for a full orchestra, and the Tally Ho! concert series was born.

In all, three Tally Ho! concerts were staged in Dunedin Town Hall between 2015 and 2019, with Downes working long hours on composing and orchestration.

"Tally Ho! came along and blew our timing out of the water for five years," Downes said.

"It was a monumental job."

Meanwhile progress on The Verlaines’ recording was slow but steady, with 19 songs for Dunedin Spleen recorded by Downes (guitar-vocals), Darren Stedman (drums), Rob Burns (bass), Tom Healy (guitar), Stephen Small (keyboards) and guests, completed the album by the end of 2018.

It was mixed in Dunedin, then mastered at Abbey Road, London, by Frank Arkwright, and after record label delays was finally released in digital format by the band in May, 2019.

The journey from inception to physical release has been epic, but the band is excited both by the album’s imminent release and by the new partnership with Schoolkids Records.