WDC: Winds of change likely to blow through Waitaki 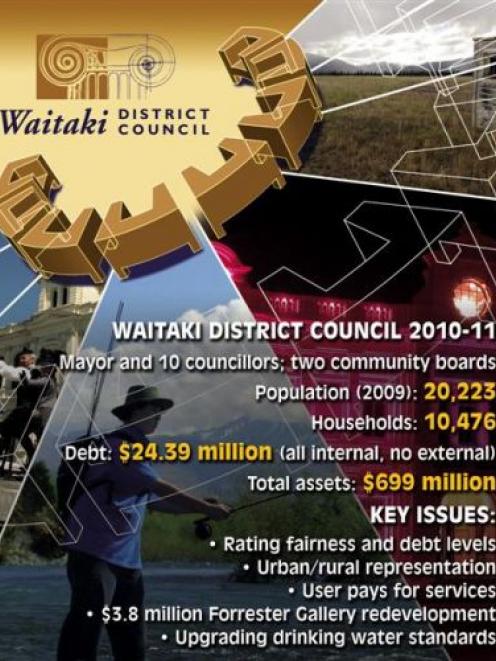 Some major changes could occur on the Waitaki District Council in next month's election, with new contenders replacing some long-serving councillors and four candidates wanting to be mayor.

The mayoralty is likely to be a two-horse race, with most money probably on Mr Familton.

Mr Familton, in the 2007 election, campaigned on affordable rates, and the council's 2.65% rate increase this year - the lowest in Otago - gives him ammunition to push his case, although he is acknowledging the teamwork of councillors (which includes Mr Kircher) and staff.

A key to his win in 2007 against incumbent Alan McLay was Mr Familton getting out and known in Oamaru, where the bulk of the votes are, overcoming a perceived impediment of being from Palmerston.

So does Mr Kircher.

The issue between the two could come down to who can generate the most support behind the scenes with a well-managed campaign strategy.

Mr Burrell is starting from scratch in local body politics.

He emigrated to New Zealand in 1986, has lived in Oamaru since 2005 and, with signage and campaigning, is getting his name out.

He is offering a business-based approach to council.

Mr Cawley is an experienced campaigner and, each election, has improved his votes tally, but in all contests has finished last.

He emphasises the council should stick to providing core services - roading, water, sewage and rubbish.

The race for the six seats representing the Oamaru ward is more difficult to call, the sheer number of 18 candidates making it somewhat of a lottery for the last few places to get elected.

The next two - Mr Kircher (who is concentrating on the mayoralty) and Peter Twiss - are not seeking re-election.

The lowest polling candidates from 2007 who were elected - Peter Garvan and Rod Bidois - are standing again.

Among the challengers are some strong candidates, well-known in the community or with strong local connections.

That offers voters a more difficult choice which could see votes split, opening the way for less fancied contenders.

The major issue in that ward, which may favour candidates with a strong farming background, is the big increase in rates for high capital value properties, particularly dairying.

But another issue is farmers having to pay for services they do not use, such as tourism promotion and economic development.

Elections are not needed for two wards, Cr Kathy Dennison being re-elected unopposed and Omarama businessman Craig Dawson being elected for the Ahuriri ward after long-serving councillor Struan Munro withdrew his nomination.

In the community boards, Ahuriri will need an election, with six candidates.

For the Waihemo board there were four nominations for five positions.

A by-election will have to be held early next year to fill the vacancy.

The Oamaru Licensing Trust has also attracted interest this election, with voting needed in two of the three wards.

In ward 1, the present chairman, Ali Brosnan, and trustee, Peter Garvan, are being challenged by Barry Monks and Scott Ridley for the three positions and in ward 2, sitting trustee Pam Spite faces Malcolm McKenzie.