All go for Martha project in Waihi 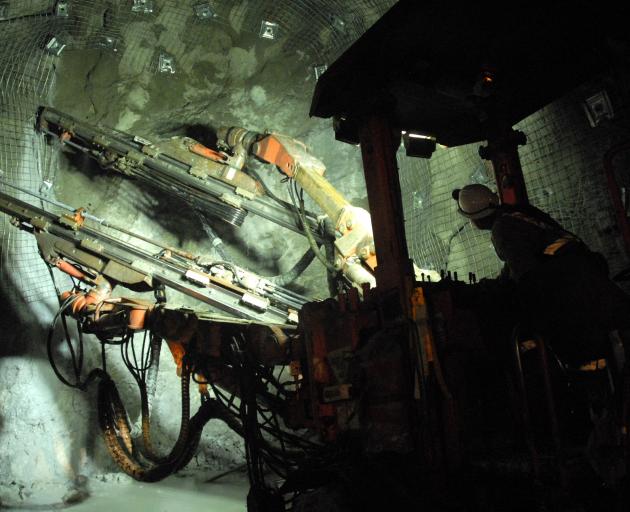 Underground drilling at Oceana Gold's existing Correnso mine in Waihi. A further 42,000m of exploration drilling is planned for the Martha underground project this year.PHOTO: SUPPLIED
Oceana Gold's mine at Waihi in the central North Island has the green light for its underground Martha project, after no appeals were filed against its recent resource consent application.

Oceana chief executive Mick Wilkes said the permitting process had concluded with no appeals filed and the company had received its resource consents to start operations.

"The Waihi operation has had a long, rich history of operating to the highest of environmental and social standards globally while contributing significant socio-economic benefits to Waihi and the country.

"We're excited to be granted the consents and for the opportunity to continue over 140 years of gold mining history at Waihi," Mr Wilkes said in an ASX update yesterday.

Waihi employs up to 350 staff, including contractors.

Earlier this week, Oceana outlined its capital spending programme for its four mines for calendar 2019.

At Waihi, between $US35 million ($NZ51.8 million) and $US50 million would be spent, including up to $US12 million for exploration drilling alone.

Since August last year Oceana had been test drilling from underground and has budgeted for a further 42,000m of exploration drilling in 2019.

The Martha project proposes to go in part underground beneath residential areas of the adjacent Waihi township, which it has done in the past.

Test results to date had an estimated "inferred resource" of about 339,000 ounces of gold, which was based on only one-third of the planned drilling programme, Mr Wilkes said.

Management plans and detailed mine designs had been started to allow mining operations to begin, which would include underground and infrastructure development.

"The company expects that at full underground mining rate at Martha, the Waihi operation production would return to more recent historic levels," he said.

While Oceana is still working out its separate underground Correnso mine at Waihi, the historic Martha pit has been closed since 2015 following a major slip.

While it has been reported the Martha project could add 10 years to the Waihi mine life, there was no mention of a formal mine life extension yesterday.

During the ramp-up phase, Oceana would continue to drill the Martha underground targets using four diamond rigs situated in two underground drill drives, which were beneath the Martha open pit, to further discover and add gold resources, he said.

Based on studies and exploration to date, the exploration target is of between five and eight million tonnes of ore, grading four to six grams of gold per tonne of ore, within Martha underground.

Oceana has also signalled there is potential for a second underground operation at the Golden Point prospect at Macraes in East Otago.