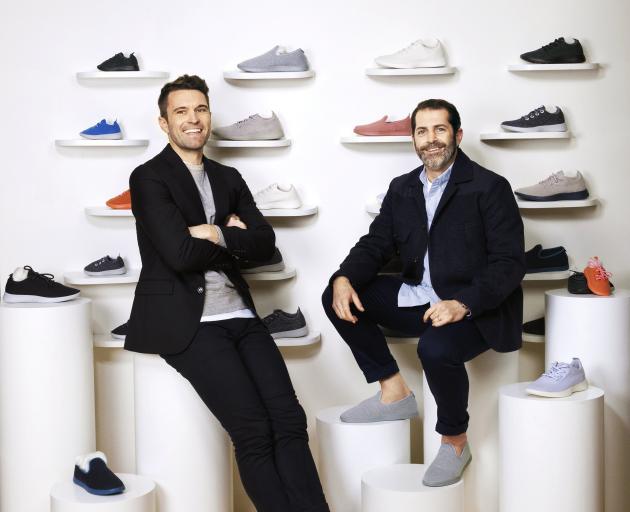 AllBirds co-founders Tim Brown (left) and Joey Zwillinger. Photo: Cody Pickens
Allbirds is set to follow Rocket Lab and become the second company founded by a Kiwi to line up a multi-billion Nasdaq listing this year.

The maker of environmentally-friendly footwear and activewear, made from New Zealand Merino wool and various recycled materials, was founded in 2006 by ex-All Whites captain and Wellington Phoenix player Tim Brown and Joey Zwillinger - a renewables engineer whom Brown met in San Francisco, where the company is now based.

It now sells more than 1 million pairs of shoes a year after becoming trendy with everyone from Silicon Valley execs to ex-President Barack Obama to Leonardo DiCaprio (the Hollywood A-lister who has also invested in the company) to a raft of Silicon Valley icons including Google cofounder Larry Page being snapped wearing its woolen sneakers.

In an SEC filing overnight, AllBirds officially applied to list on the Nasdaq.

The document does not yet say how much money the company will seek to raise, and at what valuation, but last year the woollen-shoe maker had a Series E round that raised US$100m at a private equity valuation of US$1.7 billion ($2.4b).

And the filing reveals that while Allbirds has some big ambitions, it is - for now - also making some big losses.

Allbirds posted a net loss of US$25.86m for 2020, wider than the US$14.53m loss in the prior year as it booked higher costs associated with headcount, operations and digital advertising.

Net revenue rose to US$219.3m from $193.7m, driven by increases in average order value and the company's digital sales.

The company said the revenue growth was partially offset by a 25 per cent decline in its physical-retail channel largely due to store closures during the pandemic. Store reopenings have improved its performance, but 2021 same-store sales as of June 30 remained below 2019 levels, the filing said.

The revenue figure reveals a lot of room to grow. In shoe metaphor terms, Allbirds is still kids' size next to the likes of Nike and Adidas which have annual turnover upwards of $37b and $20b, respectively.

As of June 30, Allbirds had 27 stores, including outlets in New York, Shanghai and Berlin, but 89 per cent of sales came from online.

Proceeds from the IPO will go, in part, to opening more bricks-and-mortar stores around the world. The filing also says Allbirds could use some of its new funds for acquisitions.

The filing reveals that Brown (today co-CEO with Zwillinger) had relatively modest remuneration of US$361,394 last year.

But as with most US startups, most of his compensation will come from bonuses issued in the form of shares (stock options), and his stake in the company.

In terms of stock options, the filing says Brown has been awarded 625,000 shares with an option price of US$5.09, making them worth a total US$3.2m. A third of the options can be exercised immediately.

The preliminary filing has blanks next to investors' shareholdings, but confirms that Brown is one of 13 shareholders, along with Zwillinger and institutional investors like Fidelity

The filing revealed Allbirds has a loyal following. Repeat customers accounted for 53 per cent of its sales last year, up from 46 per cent in 2019, the company said.

Its fans also spend more money over time. A repeat customer's average spending grows by more than 25 per cent in the second year they shop the brand, Allbirds said.

While it was founded on a grant from the NZ wool indusrtry and is still a high-volume purchaser of NZ Merino wool, the company now also makes footwear with products derived from everything from sugar cane to silky fabrics made from eucalyptus trees. In February, Brown revealed plans to commercialised a plant-based "leather."

It has just released a range of apparel or "athleticwear", with leggings, tops and T-shirts made from Merino wool and eucalyptus fibre

In September 2019, Allbirds ran into potential flak as e-tail giant Amazon released a house-brand woollen and synthetic shoe that paid homage to the Kiwi-American company's product, but which at US$45 sold for half the price.

Brown told the Herald that Allbirds would not go legal. His company preferred to push its environmental credentials. It would highlight that it was not possible to produce a US$45 shoe in carbon-neutral, sustainable fashion.

Since 2019, Allbirds has imposed an inhouse "carbon tax" on its products in a bid to achieve carbon neutral production.

Brown's company used an in-house team plus consultants to carry out a full audit of its carbon footprint, from sheep stations in South Canterbury to its textile mill in Italy to its manufacturing in South Korea to San Francisco, where it calculated the environmental cost of its corporate staff's daily commute.

The Kiwi entrepreneur would not give the amount, but told the Herald that money generated from the "tax" would help fund projects in three areas: three areas: replanting Amazon rainforest, developing wind farms in India and a project to trap methane from landfill and meat production.

While being good for the planet could ultimately be good for the bottom line if it attracts more customers, the Times sniffed that Wall Street hasn't always taken to companies wiht do-gooder intentions.

Earlier, Brown declined to directly comment on the IPO talk.

But his company sent the Herald the following statement: "Allbirds has always been focused on building a great company, and as a B Corp [diversity-certified] and Public Benefit Corporation [a for-profit company that also has environmental and social goals], doing what is best for our stakeholders (planet, people, investors) at the right time and in a way that helps the business grow in a sustainable fashion."

The IPO is being led by Morgan Stanley, JPMorgan Chase and Bank of America.

Allbirds plans for its shares to trade on the Nasdaq under the ticker BIRD.

Hatch was quick to draw the listing ot its members' attention. More than 6000 Kiwis participated in Rocket Lab's recent Nasdaq listing through platforms including Hatch and Sharesies.