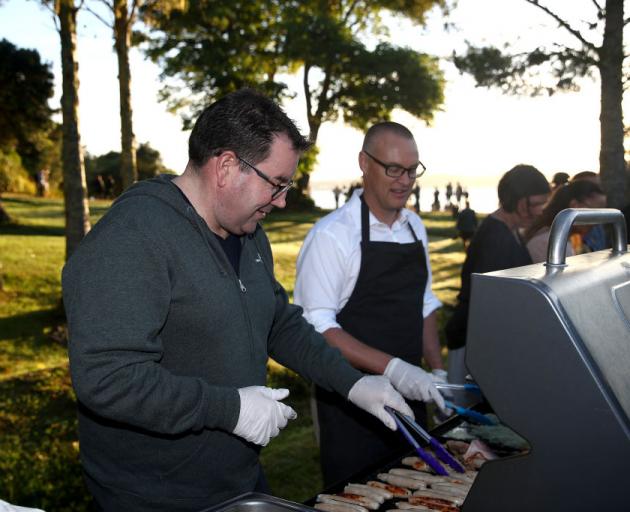 Finance Minister Grant Robertson (left) has plenty of food for thought as he cooks up his May Budget with his Associate Finance Minister David Clark. Photo: Getty Images
New Zealand is still regarded as one of the healthiest economies in the world and that was demonstrated when the Crown accounts provided a more positive view of the half-year financial results than expected.

The more money the Crown has before the May Budget, the more pressure will come on new Finance Minister Grant Robertson to deliver on some of Labour's more ambitious election policies.

Mr Robertson has indicated he will be taking a conservative approach to debt levels, particularly getting debt down lower as a percentage of GDP than National. The process is expected to take longer, but Mr Robertson may turn into his mentor Sir Michael Cullen in how he approaches the Budget.

Mr Robertson has earmarked more spending for his first Budget to meet some of the election promises but the thought of a global market meltdown may change his mind.

Labour wants to build 10,000 state houses a year, end child poverty, improve healthcare and education availability. It has already approved free tertiary education for this coming year for those who have not completed one year of tertiary study previously.

Prime Minister Jacinda Ardern is keen on trains and trams for Auckland, and Dunedin needs a $1.4billion hospital. The Christchurch rebuild has some way to go.

New Zealand has a $1billion regional development fund to play with. And that is just the start.

The Crown accounts showed the operating balance before gains and losses (obegal), the preferred measure of New Zealand's economic strength, was $1.1billion at December 31, $800million higher than expected.

Core crown tax revenue was $32.7billion for the six months, $600million higher than expected. Source deductions and GST were ahead of forecast by $300million and $200million respectively.

The Treasury said some of the variance could be expected to remain until the end of the financial year.

Data out on Monday showed New Zealanders spent more in January than in the previous January, as low interest rates encouraged them to spend on larger-ticket items.

Net investment gains for the Government, mainly through the New Zealand Superannuation Fund, came in at $4.3billion, $1.8million higher than forecast.

The investments would be lower in future.

When the gains and losses were added to the obegal, the operating balance was $3.5billion, $900millon higher than forecast.

The results flowed directly into net worth attributable to the crown which was $800millon higher than forecast at $114.1billion.

Again, the forecasts received from the Treasury were shown to be widely inaccurate.

Source tax deductions were $300million, or 1.7%, higher than forecast and was likely due to the higher employment growth compared to the PAYE forecast. Unemployment was running at recent lows and is expected to remain that way.

Mr Robertson said in a statement the ''positive results'' chimed with the evidence he had been hearing through recent consumer, employee and business confidence surveys. Unemployment fell to a nine-year low of 4.5% in December. The ANZ's job ads series in January showed the biggest monthly increase in three years and employment confidence was also near 10-year highs, according to the latest Westpac McDermott Miller index.

''We've seen consumer confidence improve over the past month, while businesses' confidence in their own activity - which is more closely correlated to economic growth than headline business confidence - has also been positive.

''At this point in the year, these results indicate the economy is tracking well,'' he said. The Government was committed to seeing the good results continue and ensuring sustainable growth and a fair share in prosperity for all New Zealanders.