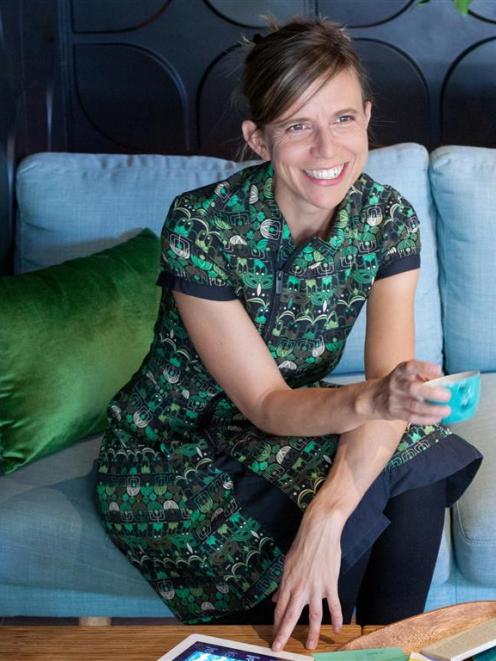 Architect and Patternsnap founder Virginia Fay in her Mapua studio. Photo by Bridget Chalmers Photography.
Life is about to get busier for Virginia Fay - and she can't wait.

Ms Fay, who lives at Mapua, near Nelson, founded Patternsnap, a digital library of wallpaper and fabric samples for interior designers.

Patternsnap is one of seven teams accepted into Lightning Lab XX, run by Creative HQ, a unit of the recently formed Wellington Regional Economic Development Agency.

The programme begins on March 8, International Women's Day, and each team will receive $20,000 of seed funding, as well as "perks'' from partners and sponsors.

Teams will spend 13 weeks working with more than 100 mentors to accelerate their businesses, who will include Slingshot co-founder Annette Presley, Webstock co-founder Natasha Lampard and Kiwibank founder Sam Knowles.

It will culminate in a final "demo day'' event, where all teams will pitch to a room of angel investors seeking further funding.

Ms Fay grew up in Dunedin and attended St Hilda's Collegiate before heading to Auckland to study architecture, later establishing her own architecture practice in Dunedin.

While she and her family now live at Mapua, she retained strong associations with Dunedin and still loved the city, she said.

Interior design was also a passion and she found it frustrating, particularly living in a small town, to access samples, so she came up with the idea of an online database of samples that could be accessed on an iPhone.

Patternsnap was formed with Steven Dodd, a Wellington-based computer programmer.

There were about 200 brands on the app, with 50,000 samples of wallpaper and fabric.

While it was free at present, a premier version about to be released had more search functions for interior designers, Ms Fay said.

They were not advocating replacing physical samples, but it was a way for designers to have access to a huge array of samples and to save time, she said.

Laughingly describing it as her "big baby'' - apart from her three children - she is passionate about the project.

She said Patternsnap had "massive'' potential given it was a "billion-dollar industry'' world-wide, with 50,000 interior designers in the United States alone.

Ms Fay said she was fortunate to be able to work from home and she was grateful for the support of her family.

"In general, you have to love what you do.''

While translating something very tactile into digital media was quite tricky, it lent itself to such an application, she said.

Ms Fay was excited about her forthcoming Lightning Lab XX experience, saying it was fantastic for New Zealand women.

It was exciting to have support and mentorship from some key people.

"It's really setting you up to achieve as much as you can ... the big thing in business is putting yourself on the line and saying, ‘I'm going to do this'.''

Working remotely could be a bit hard and being able to bounce ideas off people who understood what you were doing was needed.