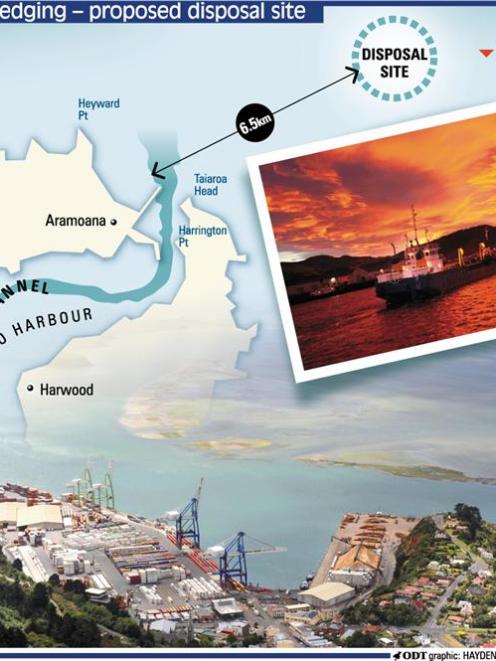 Port Otago has spent about $1.5 million on various studies so far and, following consultation on the initial draft released publicly in February, says there are only minor changes to the final, approximately 200-page application.

It appears likely the application will be publicly notified and open for submissions.

Port Otago has maintained it has been in consultation with a large cross-section of the community but, given the proximity of the Aramoana salt marshes, potential effects on recreational fishermen and sportspeople, and avian and aquatic wildlife, it is expected there will be numerous submissions on the project.

At the core of many concerns will be where the sediments, suspended in the seawater, will settle, both from harbour mouth outflows and from dumping out to sea 6.5km northeast of Taiaroa Head.

Port Otago chief executive Geoff Plunket said effects on the environment and coastline were expected to be "minor", noting that the channel widening near Aramoana's salt marsh did not impinge on its boundary.

During about 100-120 days of dredging and dumping at sea, a "key" finding was that sand sediment would drift to the true north rather than any other direction, the application says.

The "fine and medium silts" would be dispersed similarly "mainly into deeper waters and canyons offshore".

"Any sediment that reaches the Otago coastline will not be discernible to beach users," the report said.

The suspended sediment concentrations would be highest in the main shipping channel, side channels such as at Quarantine Island and Portobello peninsula, and inter-tidal banks nearby. The sediment "deposition thicknesses" would not change much during the 100-120 days of dredging.

Most of the 7.2 million cu m of sand and silts (of varying weights) would go to the offshore dump site, with the plume of the released sediment expected to settle 18km towards the north and be 5km in width.

The impact on recreational fishing and diving was "likely to be localised and short term", while for surfing and swimming, there would be a "negligible" reduction in wave height of about 10mm and otherwise "the wave environment will remain unchanged, with no increase in erosion or accretion [build-up]".

The mobility of fish and mammals meant they could avoid suspended sediments, while zooplankton and larval fish could tolerate predicted levels.

Some invertebrates and cockles could be smothered by sediments, but this would be "very localised and short term", with only a small percentage of the overall resource affected. They were expected to reestablish colonies over time.

Rock lobster and paua fisheries were expected to be exposed to very low levels of sediment with temporary and minor effects and there were no shellfish resources at, or near, the offshore disposal site, Port Otago said.

Port Otago's Proposal
• Port Otago plans to deepen its 13km of channel from Port Chalmers to Aramoana's salt marshes, opposite Taiaroa Head, removing and disposing of up to 7.2 million cubic metres of silt and sand, mainly 6.5km out to sea.
• The channel can at present cater for ships up to 281m in length, 12.5m draught carrying 4100 TEU's (twenty foot container equivalents). The deepening and widening will allow a "new generation" of ships up to 347m in length with a draught of 14.5m carrying up to 8000 TEU's to access Port Chalmers.

Harington Point-Te Rauone beach
• In a separate project, but using 45,000cu m of dredged sand, Port Otago wants to embark on restoration of 200m stretch of Te Rauone beach, near Harington Point, including a groyne. An application for resource consent is expected to be lodged with the ORC in a few months.