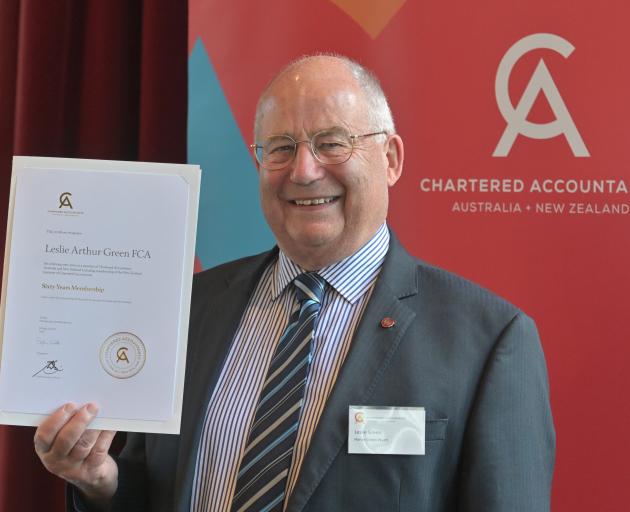 Les Green celebrates 60 years as a chartered accountant in Dunedin at a lunch at the Dunedin Club on Wednesday. PHOTO: LINDA ROBERTSON
Les Green was slightly in the red this week.

Not because he had cash-flow problems, but because the humble chartered accountant was a little embarrassed about being recognised for six decades' service to his profession.

The 81-year-old said the bottom line was he felt uneasy a big fuss was being made about him and he was being rewarded for something that others had helped him achieve.

"I'm here because of the partners and the staff I've worked with.

"It's a team effort. You can't do it by yourself."

He was the longest-serving member celebrated by Chartered Accountants Australia and New Zealand (Caanz) at the Otago Milestone Members Lunch at the Dunedin Club.

At the same time, he studied commerce part-time at the University of Otago and later graduated with a bachelor of commerce degree.

In 1962, Harold Aitken set up his own public accountancy practice and Mr Green went with him to become the office manager.

Over the years, the practice grew and merged with other firms to form Ernst & Young in 1989, where he became one of 130 partners.

But in 1996, the Dunedin office withdrew from Ernst & Young and has since practised as Harvie Green Wyatt - one of the city's largest accounting firms.

Mr Green said he was now officially retired as a partner but still did some consultancy work at the firm.

For many years, Mr Green also lectured part-time at the University of Otago in trustee law and accounts.

He has served on Caanz's local public practice committee and on the national rural advisory committee.

Away from the ledgers, Mr Green has had a wide range of community interests, including long-term involvement in the St Kilda Brass Band, Rotary, the Presbyterian Church and Freemasons.

In 2002, he was awarded a Queen's Service Medal for services to the community.

Despite the minor embarrassment of this week's recognition by his peers, Mr Green said he was "very honoured" to receive the certificate for 60 years' service from Caanz.