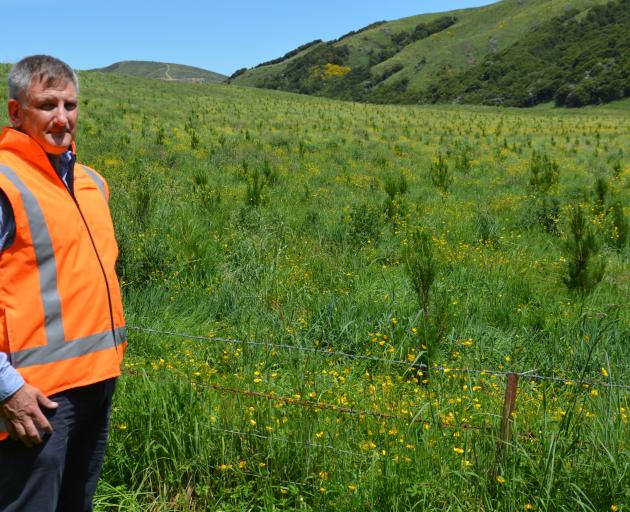 City Forests chief executive Grant Dodson at its recently acquired Takitakitoa Forest, south of Dunedin. PHOTO: BRENT MELVILLE
The purchase of Otago farmland for the city’s expanding forestry interests will be discussed at a public-excluded council meeting this Monday.

It is understood the combined price could be at or near the $5million threshold for which council approval is needed.

Dunedin City Holdings chairman Keith Cooper said while the individual purchases would not breach any threshold, the DCHL was taking the opportunity to keep council updated.

"It is still part of a tender process and confidential, so the tender value is not disclosed to competitors pre tender closing," he said.

City Forests chief executive Grant Dodson said the expansion of the city-owned forestry holdings — including the addition of 488ha of farmland last year — would not be impacted by the slowdown in log exports due to the Covid-19 virus.

He said the company also had "some interest" in certain forests in the Invercargill City Forest assets which had been put up for sale last month, though this represents only a small proportion of the estate.

"It is early stages in the sale process and we have not progressed due diligence," he said.

City Forests remains as one of the most consistent performers for the city, returning $2million in dividends for the half year to December 2019, off profits of $4million, generated by $28.9million in revenues.

Mr Dodson said the company was operating at 80% harvest production, and silviculture operations were continuing "as per normal."

"We have a production and market plan in place for the next month and are continuing to export in a limited capacity. Domestic log sales are as per normal, though we will review the plan as market conditions are updated."

Mr Dodson said the forest expansion strategy was being self-funded through operational earnings and carbon credit sales, though there had been no requirement to sell credits for the previous six month period.

"Our carbon credit asset was actively managed and sales are considered and made according to carbon market conditions and cashflow requirements at the time.