Competition to promote Dunedin to China

Fancy dressing up as a yellow-eyed penguin and surfing at Sandfly Bay?

Or maybe rewriting part of a Chinese television historical drama and setting it in Dunedin's historic buildings?

The Dunedin Shanghai Association has launched a Chinese social media competition, promoting Dunedin as a tourist destination to Chinese tourists.

The idea was the brainchild of the association's chairwoman, Teresa Chan, who wanted to do something "high-impact and fun'' to mark both the China New Zealand Year of Tourism and the 25th anniversary of the Dunedin-Shanghai sister city relationship.

The association was a voluntary group and members comprised anyone with an interest in that sister city relationship. 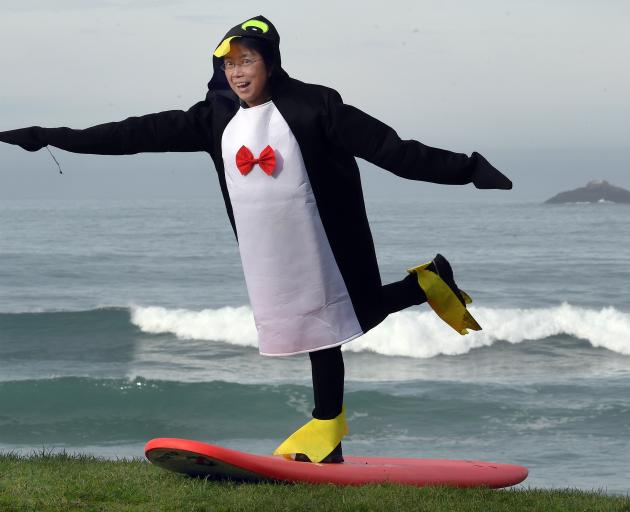 The Dunedin lawyer encouraged anyone - such as University of Otago or Otago Polytechnic students or tourism businesses - to submit an entry that could be posted on Chinese social media platforms to publicise the city.

Many tourists who came to New Zealand tended to go to the "icon'' spots such as Queenstown and Rotorua, but Dunedin was a "bit off the beaten track''.

Ms Chan kept hearing of the need to make better use of Chinese social media as there was "no question'' it had a significant influence on tourists going to a certain place.

She hoped the competition might provide the impetus for students to get involved in doing something fun, and also tourism businesses might see the opportunity to do something "a bit different''.

Criteria had been left broad so entrants would come up with the ideas and "get the creativity going'' and she was looking forward to seeing those ideas and what came out of the initiative.

August 31 is the deadline for proposals to be submitted and the campaign will run from September to November. Entry is free and there is a $3000 prize sponsored by BNZ.

Ok but let's not forget events in Hong Kong, Uighur concentration camps, the harassment of Anne Marie Brady in Christchurch and the Belt and Road initiative designed to enslave nations trading with China politically. When Air NZ cannot refer to Taiwan as an independent country we are on a slippery slope to having our political freedoms curtailed by an aggressive and expansionist power.

Exactly nighttimejohn, China is a brutal communist dictatorship, and lets not forget what they did to the green MP Russel Norman, they took his flag, and wouldn't give it back...seriously though, they roughed him up in the process of grabbing that flag, and as much as I dislike Russel Norman , having Chinese government bully boys roughing up our MP's in public is not on....its offensive.