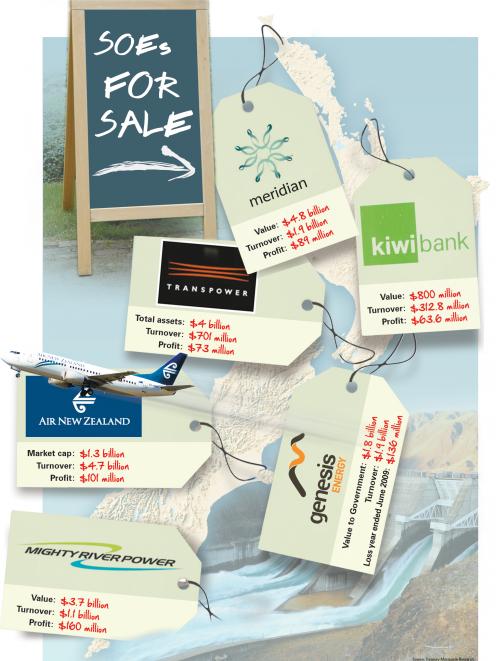 Prime Minister John Key unexpectedly announced this week that the initial public offering of Mighty River Power would not proceed until the second quarter of next year. Business editor Dene Mackenzie looks at the implications.

The delay in the initial public offering of Mighty River Power until the second quarter of next year will greatly compress the Government's planned partial sale of state-owned enterprises.

Opponents to the sale are rubbing their hands in glee with the prospect that a citizens-initiated referendum could in fact stop the process completely.

But prospective investors are left wondering whether or not they should use their available funds to invest in other companies now or keep the money in bank deposits in the hope the floats do proceed.

If the Government tries to rush the floats of Mighty River Power, Genesis Energy and Genesis through before the next election, the so-called "mum and dad" investors might run out of money to participate in all issues.

That would hurt the Government as the sales were promoted as an opportunity for New Zealanders to invest in the energy assets.

Solid Energy is unlikely to be ready for sale before the 2014 election given its balance sheet problems and the threats of mine closures on the West Coast.

Brokers spoken to by the Otago Daily Times said if the companies were being made available to international and New Zealand investors on a first-come, first-served basis, there would be no problem with finding the funds for all of the companies to float before the election.

Giving New Zealand investors and institutions first crack at them could see a credit squeeze and a lower value paid for the shares.

Instead of $5 billion to $7 billion in sale proceeds, the Government could be looking at receiving $5 billion at the most.

Mr Key said the float of Mighty River would be followed later next year by an IPO of up to 49% of either Meridian or Genesis.

During the election campaign, Mr Key campaigned ruthlessly on the asset sales programme. More than one million voters ticked National at the ballot box.

Labour and the Greens campaigned against the sale with Labour suffering one of its worst defeats and the Greens gaining votes. Since the election, the Greens have been making the news on asset sales, even employing people to get signatures on a petition calling for a referendum on the sales.

Mr Key said that ministers had decided to undertake a short period of consultation with iwi on the "shares plus" concept raised in the Waitangi Tribunal's interim report.

"Since receiving that report 10 days ago, much of the legal and official advice we have received has been around this concept."

In essence, "shares plus" refers to the idea that certain Maori interests would be given particular rights and powers in relation to the company, above and beyond the rights of other shareholders.

The Government's view was that the idea should not proceed. Mr Key said it was not in the national interest for any group within Mighty River Power's potential 49% minority shareholding to be given such rights.

Almost every form of redress to Maori that could be covered by "shares plus" could be achieved in other ways, he said.

Dunedin financial adviser Peter Smith is not concerned about the delay in the float of Mighty River Power.

"I do not think it will have a major negative effect. As far as I am aware, the finer details were not fully sorted regarding the sale process. It makes no difference to my clients as to when they will buy the state-owned assets."

Clients would still make a purchase but the opportunity lost by sitting on cash for another six months might mean they eventually bought less than originally thought, Mr Smith a principal of the Kepler Group, said.

Sitting on cash with current low interest rates was unproductive.

It was also most likely prices early next year would be more buoyant than now, if the various scenarios emerging on the world scene were to be believed, he said.

The European Central Bank was working hard with Greece, Spain, Italy and Portugal with the Germans and France still in a positive and supportive mode.

"Nobody has been abandoned yet."

China was slowing its own gross domestic product (GDP) growth and the United States was expected to have QEIII (quantitative easing) in place by the end of the year. The US elections would also be over.

Australia was still in a down cycle but the banks had made good profits and were keeping the financial sector happy, Mr Smith said.

"All this suggests that the general feeling of wellbeing of Christmas and beyond will carry through to a buoyant market."

Institutions would have to buy shares in the SOEs as it was in their mandates of managed funds to own top New Zealand companies. The energy companies would be in that category.

KiwiSaver accounts and the New Zealand Superannuation fund would benefit from the floats and so, too, would all New Zealanders, he said.

However, Milford Asset Management executive director Brian Gaynor said he had severe doubts about the Government going ahead with the partial sales, putting the chances of it happening at less than 50-50.

Mr Gaynor told the New Zealand Herald the asset sales had been a key National policy but the delay signalled an admission of defeat and there were now several stumbling blocks faced by the power companies, ranging from the water rights issues to negotiations over the Tiwai Point contract and the potential for low growth in the industry.

He predicted the delay would prompt aggrieved parties to fight even harder.

"Every time this happens it reduces the price and creates more uncertainty for investors. The thing is caving in on them."

Three months ago there were fewer issues, he said.

Discussions with iwi were unlikely to be resolved quickly and even if the water rights issue was negated, Mr Gaynor expected other areas to be challenged as well.

The sales process had been run poorly as no single person had taken responsibility for it, he said.

Shareholders' association chairman John Hawkins said if the floats did not go ahead it would be extremely disappointing because there were not many large companies which listed on the New Zealand sharemarket.

"Investors are looking for things with growth and good dividends. This low interest rate environment is hurting a lot of people who have saved for their retirement and are struggling with incomes that are half of what they used to be."