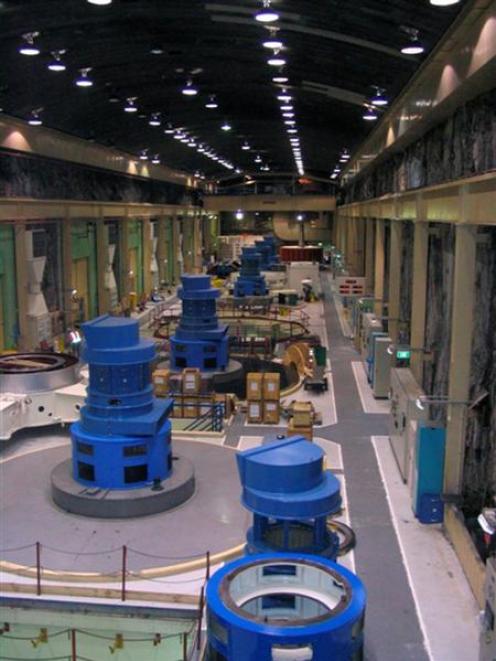 The price of electricity supplied by Meridian Energy from Manapouri is still in dispute. Photo supplied.
The Government has fallen into a commercial trap set and sprung by resource giant Rio Tinto during negotiations on electricity contracts for the Tiwai Point aluminium smelter, Labour state-owned enterprises (SOE) spokesman, Clayton Cosgrove, said yesterday.

Labour and the Greens were critical of the failure to secure a successful outcome. Contacted by the Otago Daily Times and asked what Labour would have done differently, Mr Cosgrove said he would not have announced an asset-sale programme before successfully completing the negotiations with the smelter.

The new contract with the smelter started on January 1 but before that Rio Tinto had indicated it wanted to change the conditions, he said.

''Rio waited for Prime Minister Key to green-light the sale of Mighty River Power and sprung the trap. Key fell in.

''The Government was negotiating from a position of weakness. Key had to get the sale off the deck, no matter what,'' Mr Cosgrove said.

Green Party leader Russel Norman said in an interview the major problem was the Government and Meridian, the supplier of power to the smelter, did not work together in the negotiations.

''New Zealand Incorporated was negotiating with a global and sometimes gnarly giant mining company and it had two sets of negotiating teams.

''It was absurd. It seems like the Government was not telling Meridian what it was doing.''

Dr Norman was unsure what the rules were when it came to the Government dealing with the board of a state-owned energy company like Meridian, but said both parties should have worked together to secure the best deal for New Zealand.

The asset-sales process had undermined the strength of the Government's hand, he said. Rio Tinto had used falling commodity prices and the high value of the kiwi to push the Government into a corner.

Mr Cosgrove said SOE Minister Tony Ryall failed to intervene when Government-owned Solid Energy cut hundreds of jobs on the West Coast but he went behind the Meridian board and opened secret negotiations with the smelter's owner.

Asked how he would handle the negotiations, Mr Cosgrove said the issues had to be made public. It was not only about saving Southland jobs, although that was a big part of the decision. Electricity prices and aluminium prices were part of the equation.

''You can't write a blank cheque on behalf of taxpayers. It has to be done with a cool head.''

In effect, he said, the Government was prepared to let taxpayers subsidise a mining giant with a $US16 billion ($NZ19.1 billion) positive cash flow, subsidise artificially high electricity prices and keep Mighty River Power shares high, just to get the sale under way.

''That's three ways the taxpayer is subsidising this. It's not a good deal.

''These are not cunning tactics by the Government. It's financial mismanagement,'' Mr Cosgrove said.

Industry sources told the ODT Rio Tinto was negotiating to close other smelters around the world, as part of a plan to counter falling prices. However, it was unlikely Tiwai Point would stay closed forever, even if Rio Tinto decided to do that to make a point. While the closure would be devastating for the Southland economy, Asian economic growth would eventually increase the demand for aluminium.

The real danger would be the loss of skilled labour from Bluff and Invercargill, coming on the back of meat works redundancies, the sources said.

The plot so far

Later that day, State-owned Enterprises Minister Tony Ryall revealed the Government had been in contact with the smelter's ultimate owner, Rio Tinto, to try to bridge the gap in the positions of Pacific and Meridian.