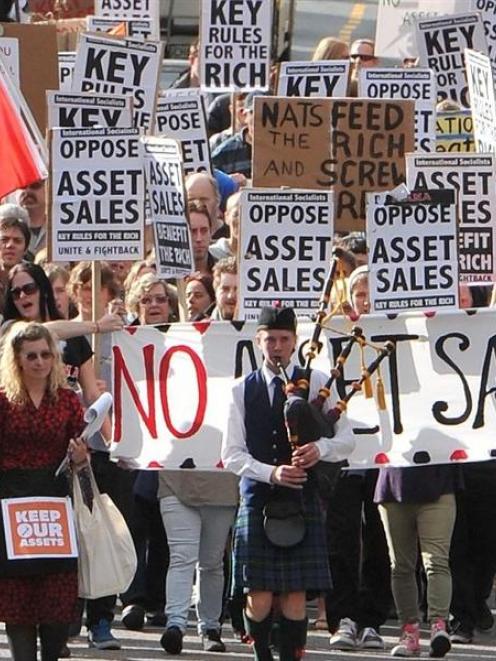 Opponents of state asset sales march down George St on Saturday before a rally in the Octagon. Photo by Craig Baxter.
New Zealanders had the power to stop the privatisation of state-owned assets, Dunedin-based MP Metiria Turei told protesters on Saturday.

The Green Party co-leader received an enthusiastic cheer from the more than 200 people who had marched down George St to the Octagon voicing their displeasure at the sell-off of state assets.

The Dunedin Power to the People march was one of several nationwide protests at the weekend against asset sales, which are set to begin next month with the 49% sale of Mighty River Power.

Ms Turei said hope was not lost for opponents of the sales.

''We can make things change. We just have to keep out there and keep up that message of hope, ambition and change, and power to the people.''

The announcement by Labour and the Green Party to introduce a single electricity buyer to pass on savings to consumers had ''freaked out'' the Government, she said.

She was unapologetic over sharemarket concerns following the joint announcement, saying electricity companies had taken $4.5 billion from consumers during the past six years.

Protesters at the National Party's Mainland Region conference said their mock tollbooth might be used again.

Keep Our Assets Christchurch members put it up on the Wairau River bridge, on the road to Hanmer Springs, where the conference was held, saying the bridge had been ''privatised''.

''We got such a good positive reaction from the public we will consider what other uses we can put it to,'' member Steve Howard said.