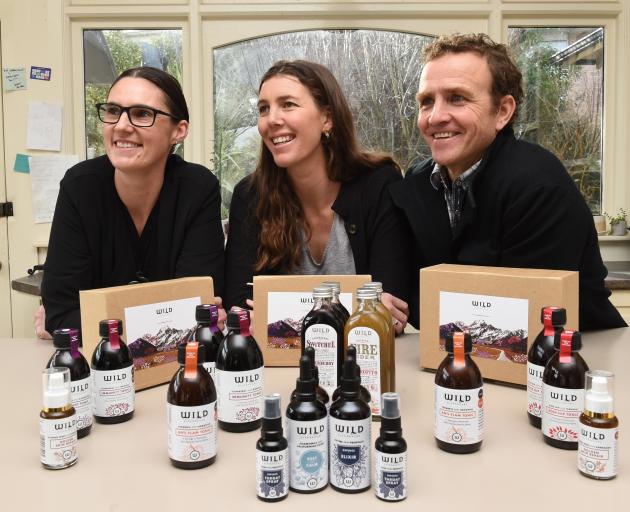 It began as a project involving five friends - including Mr Davis and his partner Ms Vaughan - with shared values.

But it had evolved into a more functional and growing business that was also potentially scaleable.

Mr Davies came from a background in business management, while Ms Vaughan's background was in native plants and environmental science.

Ms Macfarlane, a naturopath and medical herbalist, was a newer addition to the team, having moved to Purakaunui several years ago.

She and her husband Jed, a design engineer at Fisher and Paykel, and their 2½-year-old son Fred, have an organic property where they grow a "random" mix of greens and herbs, some of which were used in Wild Dispensary's products.

Wild Dispensary has had a stall at the Otago Farmers Market for several years and that had been an excellent starting point to get sales, Ms Vaughan said.

They loved the vibe and culture of the market and had even met some famous faces: one of Pink's crew made some purchases and the singer returned to visit the stall, while they had also chatted with a back-up singer and drummer for Shania Twain.

The plan was to push further into the North Island market and possibly internationally.

Approaches had been received from Asia but they were not ready for that export market yet.

Working largely from home to keep costs down, they hired a commercial space when needed.

It was a competitive industry and all businesses had points of difference. Their philosophy was around wild harvesting and New Zealand natives.

Harvest-time was also a chance to be social and "connected", Ms Vaughan said. It was a good balance, as much of what she did was computer-based.

That was something they also wanted to create - something that was "nice to be doing" - rather than being stuck in an office all day, Mr Davies said.

Whether harvesting rosehips, horehound or St John's wort, it was a sustainable resource as there was so much of it that it could be harvested in a respectful way, Ms Vaughan said.

Ms Macfarlane, who had a career in media before retraining, had worked in health education. Her passion was herbs and educating people.

When it came to joining Wild Dispensary - she is now also a shareholder - she liked that it was local and utilising what grew in the region, and that the others involved were "awesome people".

There were varying degrees of quality in the industry and a lot of products that did not necessarily live up to the claims they suggested.

Ms Vaughan said their target market was people who were quite well educated and seeking self-care for themselves and those whom they most cared about.

They recently started a partnership with the Dunedin Wildlife Hospital, which they saw as a good fit for their business, as they wanted to give back to the community. They also did waste audits and dispatch was now 100% plastic free.

One of the good parts of being in Dunedin was that there was such a supportive community, whether it was the farmers market, their customers or the advice they had been given by Deloitte.

Both Ms Vaughan and Mr Davies - who have a son Emerson (10) and daughter Arlia (8) - were from Dunedin and loved living in the city.

Ms Macfarlane said she and her husband were "stoked" to be back in Otago, with the opportunities it provided.