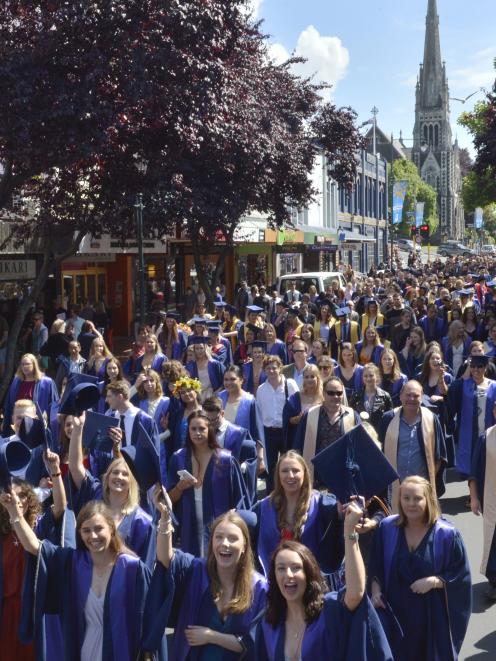 Otago Polytechnic graduands celebrate their success during the graduation march along George St, Dunedin last year. Photo: Gerard O'Brien
Sweeping proposals to change the way vocational education is delivered have been welcomed by the Otago Southland Employers' Association, but have also raised concerns as to what their effect may be on the Otago Polytechnic and Southland's Southern Institute of Technology (SIT).

Education Minister Chris Hipkins yesterday outlined ''redefined roles'' and the ''consolidation'' of courses for the existing 16 institutes of technology and polytechnics around the country.

It is proposed they be grouped under a new umbrella, the New Zealand Institute of Skills & Technology, which included a ''unified vocational education funding system''.

''Instead of our institutes of technology retrenching, cutting programmes, and closing campuses, we need them to expand their course delivery in more locations around the country,'' Mr Hipkins said.

Consultation on the proposals is open until March 27.

''We have two high performing institutes of technology and polytechnics (ITPs), the Otago Polytechnic and SIT.

''We have a successful regional focus with both the Otago Polytechnic and SIT, and we are concerned that we may lose this with a central single organisation,'' Mrs Nicholls said.

Both the Otago Polytechnic and SIT have succeeded over the years due to strong partnerships and relationships with local organisations, she said.

''The strength of the ITO [industry training organisations] model is the direct servicing to businesses and the low capital costs of using the workplace as a classroom; we would like to see this retained and improved in whatever system emerges.''

Mrs Nicholls said the qualification, standard-setting and skills leadership role should ''absolutely be led'' by industry organisations; however, further detail is needed on how to balance accountabilities in the system if ITOs have the responsibility of setting standards.

Mrs Nicholls said she would also like to see changes to NZQA to ensure that the skills leadership and standard-setting could be done swiftly and with a focus on skill outcomes, rather than assessment and compliance.