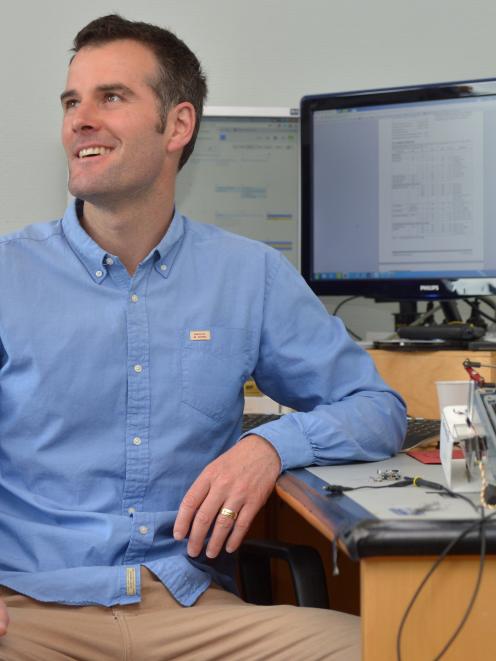 Electronics designer Jesse Teat is a firm believer in grasping opportunities. Photo by Gerard O'Brien.
He's washed cars in Sweden and skied at the Winter Olympics.

The business is the brainchild of Mr Teat and his friend Mark Butler.

The pair completed their MSc in electronics concurrently at the University of Otago.

Mr Teat does not get to do as much skiing as he would like, but he and his wife, Bridget Irving, love the lifestyle that Dunedin affords.

It's a very different life to his earlier years spent skiing. Originally from Wanaka, he went to the United States for two years on an NCAA scholarship and did 11 consecutive years of winter.

That meant lots of culture, lots of languages and ''real fun''.

But after the Winter Olympics in Salt Lake City in 2002, where he was placed 50th in the men's giant slalom, he decided it was time to move on.

He moved to Sweden for nearly three years and tried to ''build up a life from scratch''.

He had earlier done some correspondence university work - ''really to keep the brain active'' - but that was not particularly successful.

In Sweden, he picked up whatever jobs he could get and also tried to learn Swedish.

One of his workmates could not speak English which was helpful when it came to immersing himself in the language.

He worked as a paper boy, washed cars for a rental car firm for two years, taught English in a school and did ''all kinds of things''.

While it was all life experience, and a great cultural experience, ''when it came down to it, I realised you're not going to make a future for yourself washing cars'', he says.

So he returned to New Zealand to study electronics at the University of Otago, having always had an interest in ''pulling stuff apart''.

He later did his masters degree and, partway through that, got a job at Kamahi Electronics in Dunedin.

He spent four years with the contract manufacturing company and enjoyed it, saying he was given opportunities there.

One of those opportunities was to take over the shares his boss had in Insight Sport, which made and designed sports electronics.

''That was right up my alley, being from a sports background and having an interest in technology.

''I'd been working on some of their products at Kamahi for some time. It was an inevitable pathway. I thought I needed to take the opportunity.''

As he worked on products for Insight Sport, he realised it would probably be better to continue on the contract manufacturing side and contract design, hence the creation of Tussock Innovation.

The company provides a full service from hardware development to fully integrated software solutions, with two other employees working in software.

They do a ''pretty big mixture'', all contract work.

Looking to the future, he is particularly excited about the agri-tech space, the opportunities that have arisen through Gigatown, and growing the business throughout Otago.

''There's some cool things going on.

''What I love about this type of job is there's always something new and exciting coming along,'' he says.

There are opportunities for young people in the city.

They just have to ''look around''.

The Dunedin City Council's economic development unit has been helpful, while his wife, who is a partner at law firm Gallaway Cook Allan, has also been very supportive.

The biggest challenge for a business like Tussock Innovation is finding the opportunities, Mr Teat says.

''It's connecting the dots and meeting the right people who need things to be made for them or need creative minds to be on their team.''

He wants to see the business grow, eventually having specialised teams allocated to projects, but that will take time.

The company might also end up developing some of its own products along the way.

''For all the guys that work here, it's all about facing new challenges every day and hopefully solving them and seeing people happy when you have solved them,'' he says.

In Dunedin, there are a limited number of businesses willing to invest in research and development and take on new business.

But he sees the business staying in Dunedin ''for some time'' and, as it grows, it will market itself further afield.

It has been a fun life and he has reckons he has grasped all the opportunities that have come along.

He thanks his family, who have been hugely supportive in both his sporting and academic pursuits.

''Looking back, I don't think I would have taken any other pathway, changed anything that I've done,'' he says.

In sport, when you did not reach the next step, you have to move on and business is the same.

''If you don't hit the targets or make those goals, you have to find a way to pivot and change your market strategy or your business model.''