End of an era: Kiwi brewer on five years of 'Dump the Trump' beers 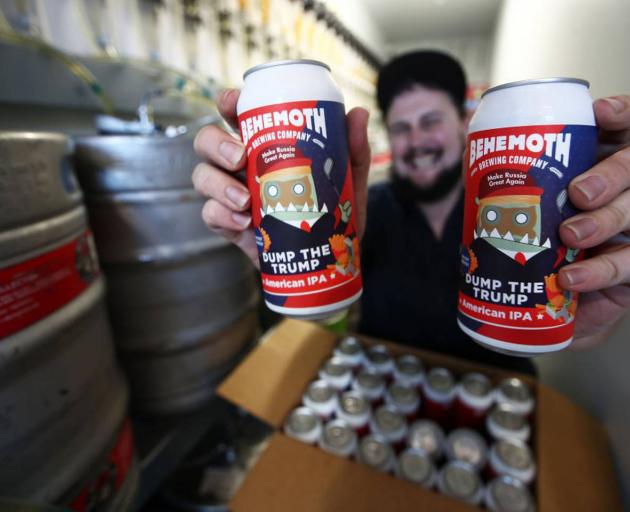 For Childs, it will be the closing of a cycle, the culmination of a part of his brewing career he never even expected to have.

Little did he know Trump would end getting voted into the White House and Behemoth's ever-growing catalogue of new beers would include a number of Trump-based beverages.

It's truly the end of an era for Childs, who brewed one final batch of Dump the Trump just before the US election, and is looking forward to cracking open his own can once the final results are announced.

Behemoth is only just over seven years old and the "Dump the Trump" beer has been around for five years, making it a significant part of the brewery's history.

In fact, back in 2018, Behemoth made headlines when Trump supporters discovered the Kiwi brewery and, without ever having tasted the beers, flooded its Facebook page with negative reviews.

There was no cause to worry though, as Behemoth's true fans came to the rescue, with positive reviews to take the average back up for the brewery.

Still, he got under the skin of pro-Trump supporters, which Childs at the time described as "entertaining".

The brewer will do one final Trump beer, which will be released in the next couple of weeks, but then that will be it for Trump-inspired beverages to be drunk with a side of orange Cheetos.

For Behemoth, it's time to move on.

"We were very small when we first did Dump the Trump, we didn't have big distribution. To be fair, I only made it because I thought it was funny, I never thought he'd get in," Childs recalls.

But he did and, for all the negative things that happened since then, New Zealand did get a lot of good Behemoth beers out of that.

"I guess they resonate with people," Childs says, joking that "99 per cent of people in New Zealand like them, and the other one per cent are wrong".

"Beer is the only voice I have," he says. "It's my platform, and this is how I choose to use it."

That said, the brewer does not want Behemoth labelled as "the anti-Trump brewery".

"I managed to get out of law [Childs is a former lawyer-turned-brewer] and into a place where I can do whatever the hell I like, within reason, but I don't want to be the Dump the Trump brewery," he says. "My thing is not being anti-Trump."

"It's not political. It's just that he is a bad human who should not have that job."

Whether he likes it or not, "Dump the Trump" has been a success and Childs says he has seen a spike in sales of that particular IPA this week, as America counts the votes.

Throughout New Zealand, many fridges are stocked with one final can of Dump the Trump, ready to be open as soon as results are called.

Childs has one in his fridge, too. "Only been making it for 5 years so not holding out for this moment at all," he posted on Behemoth's Facebook page, sarcastically.

Behemoth fans have commented with photos of their own Dump the Trump beers in their fridge.

Childs has about 120 cases of the final batch of "Dump the Trump" IPA left and says he will not make any more.

Those cases will be saved for Behemoth's special event next week: the official opening of its Auckland pub - Churly's - which was meant to have happened earlier this year but, like so many other things, got delayed by Covid-19.

Among the oyster shucking, the (pre-beer drinking) axe throwing and all the other surprises in story for the three-day event from Friday to Sunday next week, Childs is looking forward to running out of the IPA that made him famous, as he cheers a final "good riddance" to Donald Trump.