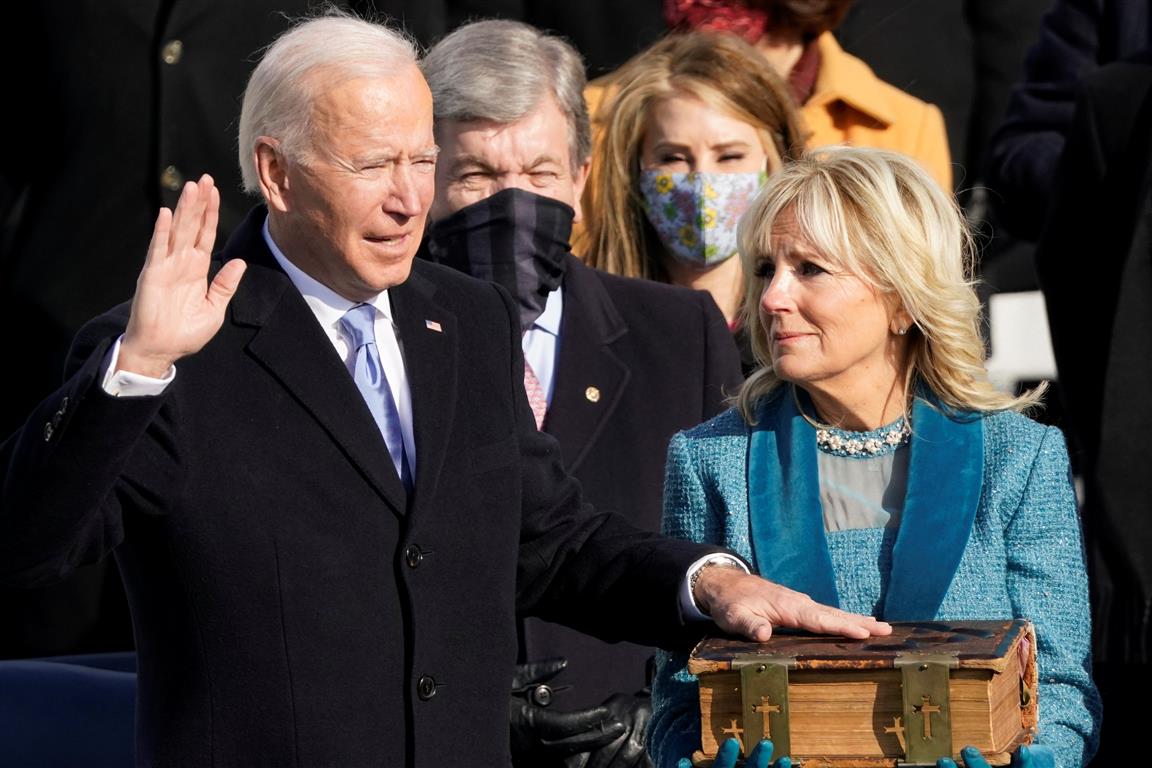 Joe Biden is sworn in as the 46th president of the United States as Jill Biden holds the Bible during the Presidential Inauguration at the US Capitol in Washington. Photo: Reuters
Joe Biden has been sworn in as president of the United States, offering a message of unity and restoration to a deeply divided country reeling from a battered economy and a raging coronavirus pandemic that has killed more than 400,000 Americans.

Standing on the steps of the US Capitol two weeks after a mob of then-President Donald Trump's supporters stormed the building, Biden called for a return to civic decency in an inaugural address marking the end of Trump's tempestuous four-year term.

"To overcome these challenges, to restore the soul and secure the future of America, requires so much more than words. It requires the most elusive of all things in a democracy: unity," Biden, a Democrat, said after taking the oath of office.

"We must end this uncivil war that pits red against blue, rural versus urban, conservative versus liberal. We can do this - if we open our souls instead of hardening our hearts."

The themes of Biden's 21-minute speech mirrored those he had put at the centre of his presidential campaign, when he portrayed himself as an empathetic alternative to the divisive Trump, a Republican.

The inauguration itself, one unlike any other in US history, served as a stark reminder of both the tumult that defined the Trump era as well as the pandemic that still threatens the country. 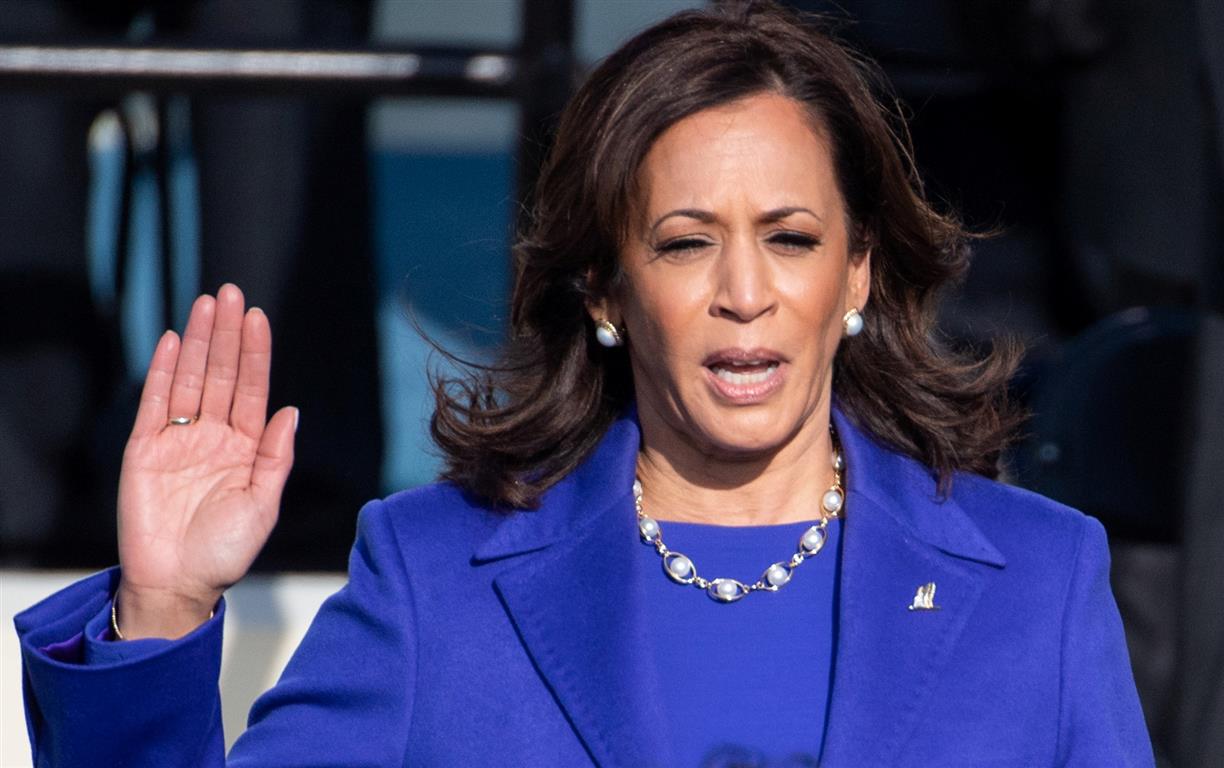 Kamala Harris is sworn in as US Vice President. Photo: Reuters
Biden's running mate, Kamala Harris, the daughter of immigrants from Jamaica and India, became the first Black person, first woman and first Asian American to serve as vice president after she was sworn in by US Supreme Court Justice Sonia Sotomayor, the court's first Latina member.

The president spoke forcefully about the Jan. 6 Capitol siege when Trump backers breached the building, sending lawmakers fleeing for safety and leaving five dead, including a police officer. But Biden never mentioned his predecessor by name.

The violence prompted the Democratic-controlled US House of Representatives to impeach Trump last week for an unprecedented second time, accusing him of incitement after he exhorted his backers to march on the building to press false claims of election fraud.

"Here we stand, just days after a riotous mob thought they could use violence to silence the will of the people, to stop the work on our democracy, to drive us from this sacred ground," Biden said. "It did not happen; it will never happen. Not today, not tomorrow, not ever."

The norm-defying Trump flouted one last convention on his way out of the White House when he refused to meet with Biden or attend his successor's inauguration, breaking with a political tradition seen as affirming the peaceful transfer of power.

There is no time to waste when it comes to tackling the crises we face. That's why today, I am heading to the Oval Office to get right to work delivering bold action and immediate relief for American families.

Trump, who never conceded the Nov. 3 election, did not mention Biden by name in his final remarks as president on Wednesday morning, when he touted his administration's record. He then boarded Air Force One for the last time and flew to his Mar-a-Lago retreat in Florida.

Biden takes office at a time of deep national unease, with the country facing what his advisers have described as four compounding crises: the pandemic, the economic downturn, climate change and racial inequality. He has promised immediate action, including a raft of executive orders on his first day in office.

After a bitter campaign marked by Trump's baseless allegations of election fraud, Biden struck a conciliatory tone rarely heard from Trump, asking Americans who did not vote for him to give him a chance.

Although his remarks were directed primarily at domestic problems, Biden also delivered a message to the rest of the world. He promised to repair alliances frayed by Trump and act as a strong partner for peace, progress and security. He made no specific mention of high-stakes disputes with North Korea, Iran and China.

Biden took the presidential oath, administered by US Chief Justice John Roberts, with his left hand resting atop a five-inch heirloom Bible that has been in his family for a century.

Later in the day, Biden attended a wreath-laying ceremony at the Tomb of the Unknown Soldier in Arlington National Cemetery in Virginia, accompanied by Obama, Bush and Clinton.

Biden's inauguration as the 46th president was the zenith of a five-decade career in public service that included more than three decades in the US Senate and two terms as vice president under Obama. At 78, he is the oldest US president in history.

He faces calamities that would challenge even the most experienced politician.

The pandemic reached a pair of grim milestones on Trump's final full day in office on Tuesday, reaching 400,000 US deaths and 24 million infections - the highest of any country. Millions of Americans are out of work because of pandemic-related shutdowns and restrictions.

"Few people in our nation's history have been more challenged or found a time more challenging or difficult than the time we're in now," Biden said.

Biden has vowed to bring the full weight of the federal government to bear on the crisis. His top priority is a $1.9 trillion plan that would enhance jobless benefits and provide direct cash payments to households.

But it will require approval from a divided Congress, where Democrats hold slim advantages in both the House and Senate. Harris was scheduled to swear in three new Democratic senators late on Wednesday, creating a 50-50 split in the chamber with herself as the tie-breaking vote.

Biden will waste little time trying to turn the page on the Trump era, advisers said, signing 15 executive actions on Wednesday on issues ranging from the pandemic to the economy to climate change.

The orders will include mandating masks on federal property, rejoining the Paris climate accord and ending Trump's travel ban on some Muslim-majority countries.

Although Biden has laid out a packed agenda for his first 100 days, including delivering 100 million COVID-19 vaccinations, the Senate could be consumed by Trump's upcoming impeachment trial, which will move ahead even though he has left office.

The trial could serve as an early test of Biden's promise to foster a renewed sense of bipartisanship in Washington.