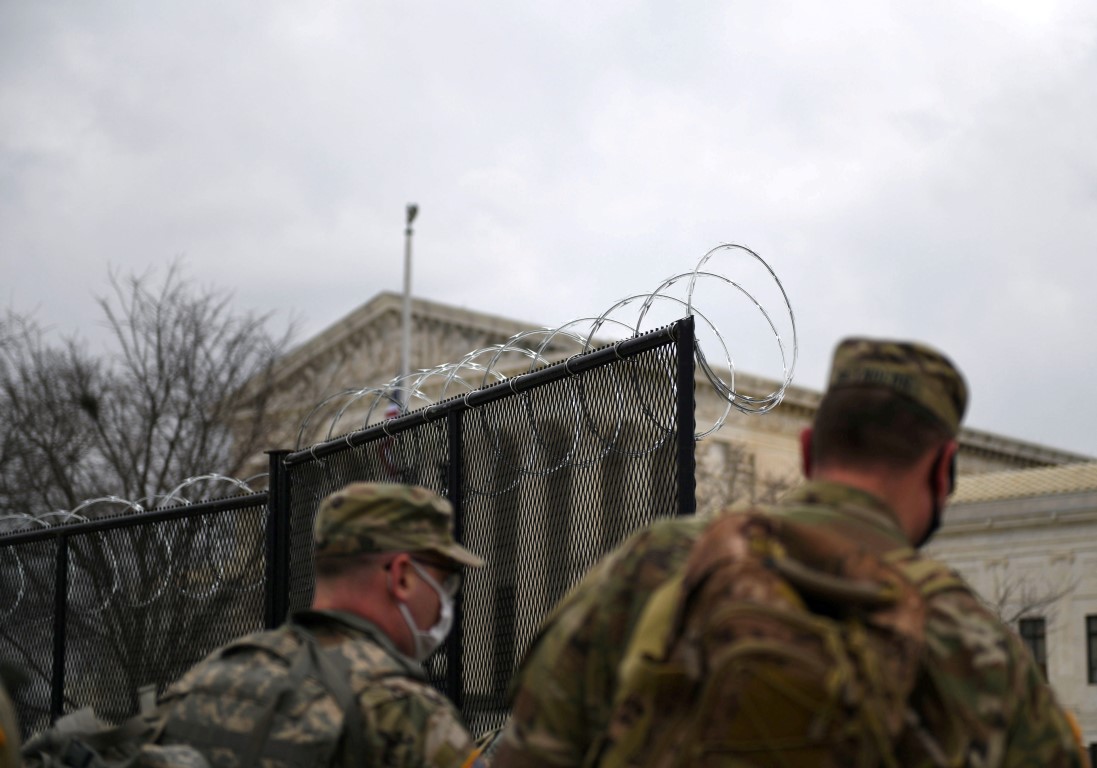 Officers from the National Guard walk near a fence lined with barbed wire at the Capitol grounds in Washington D.C. Photo: Reuters
The US capital on Friday continued to boost security by shutting down access to iconic landmarks and erecting vehicle checkpoints at a security perimeter surrounding central Washington ahead of President-elect Joe Biden's January 20 inauguration.

Presidential inaugurations are always tightly secure events with operations led by the US Secret Service, but this year's measures have been amped up after Trump supporters stormed the Capitol on Jan. 6 in a bid to prevent the final certification of Biden's victory. Law enforcement officials have warned of threats and armed groups in all 50 states.

The National Park Service said on Friday it was immediately closing the National Mall and iconic US landmarks in Washington to visitors through at least Jan. 21.

The Mall includes landmarks like the Lincoln Memorial and Washington Monument. The area around the White House has also been closed, as has a key bridge over the Potomac River that connects Virginia to Washington, as well as East and West Potomac Parks, including Hains Point, which are near the Mall.

"We cannot allow a recurrence of the chaos and illegal activity that the United States and the world witnessed last week," Matthew Miller, the head of the Secret Service's Washington field office, told reporters.

Virginia later announced it would close several other bridges connecting the state with the federal district from Jan. 19 to Jan. 21, as part of its agreement with the US Secret Service.

Maryland, the other state bordering the nation's capital, declared a state of emergency related to the inauguration.

Ken Cuccinelli, the acting deputy secretary of the US Department of Homeland Security, told CNN that Biden's team had decided to delay the inauguration rehearsal by one day due to "some of the online chatter talks about Sunday the 17th."

Still, Biden's chief of staff Ron Klain said in an interview with the Washington Post he was confident that law enforcement officials would be able to secure the inauguration.

US officials said they expect the number of National Guard troops to rise to 25,000 in Washington D.C., a number that could still increase even further.

In downtown D.C., Metropolitan AME Church, a historic Black church that has hosted historical Black luminaries like educator Booker T. Washington and journalist Ida B. Wells, said it has security plans in place but declined to provide details.

"We recognize that some people may be emboldened to focus on communities which have always prioritized justice, so we are cautious of that," a church official said.

In the Capitol Hill area, streets that are usually busy and traffic-clogged were largely empty on Friday. Residents were warned that cars within the exclusion zone would have to stay there until after the inauguration.

Even before the Jan. 6 siege, the inauguration was expected to be significantly different than previous swearing-in of presidents due to coronavirus concerns. Many of the events that accompany the ceremony will be virtual.

"This is not a concession to the terrorists. It is a recognition of the danger of COVID," US House Speaker Nancy Pelosi told reporters on Friday.

Washington's Mayor Muriel Bowser suggested to reporters on Friday that, due to the storming of the Capitol by groups of "white extremists," heightened security measures in the district could remain in effect until well after Inauguration Day.