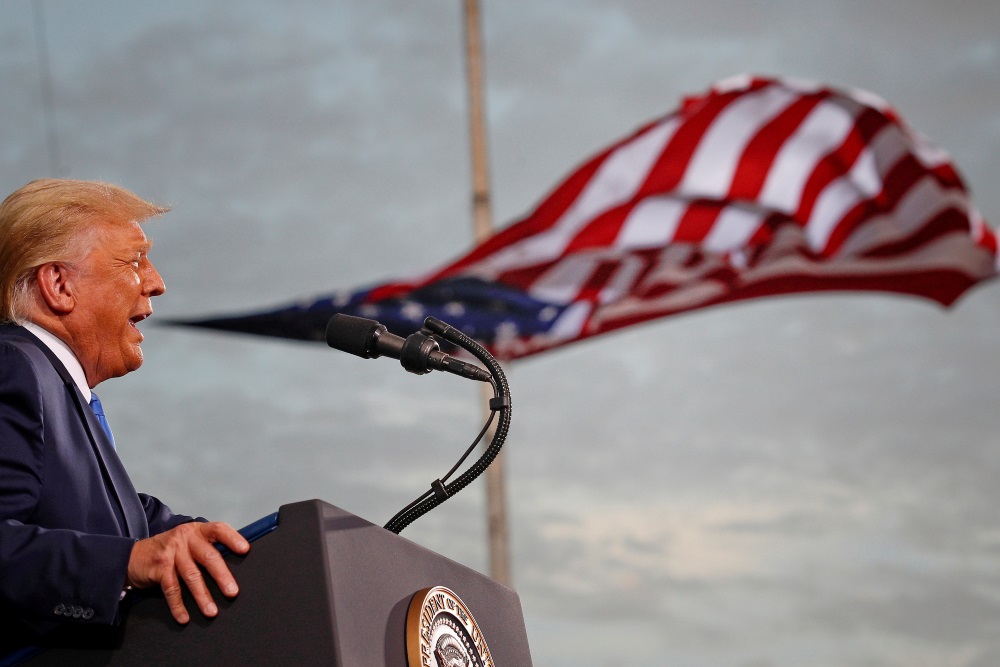 Donald Trump on the campaign trail in Florida last year. He gave his all to his supporters, firing them up at regular rallies. Photo: Reuters
A red tie, often tied too long. A raised fist, often held high to a supportive crowd. A scowling face. A raised voice.

President Donald Trump never hid how he felt. His words and body language made his thoughts clear.

For more than four years, Trump, a Republican, cultivated a political base by sharing his thoughts and emotions - pride, happiness, indignation, rage - on a daily, sometimes hourly, basis, creating an omnipresence of sorts that completely dominated the news cycle.

Like no US president has done before, he made himself the centre of attention, the star of a literal reality show that was his administration, always with an eye for the camera, a flair for the dramatic, an instinct for the outrageous.

His supporters loved it. His opponents hated it. Regardless, nearly everyone tuned in. The country and the world watched, and were consumed.

The show may have had deadly consequences. Hundreds of thousands of people in the United States died of the disease associated with the coronavirus while Trump played down the danger of the pandemic and did not model wearing a mask.

US racial and political divides widened under Trump and migrant children were separated from their parents.

The president used the power of his words and his office to attend to his political base, with which he kept a direct line of communication via his now-suspended Twitter feed.

He remembered what he had promised them as a presidential candidate and sought with some success to deliver on those pledges to build a border wall, upend immigration and cut taxes.

He threatened and irritated world leaders during trips abroad, complicating relationships with US allies who he felt were not carrying their financial weight in global alliances.

He criticised and vilified the press, while craving journalists' attention and respect. The base enjoyed his demonisation of the media and rewarded him with applause and cheering for the pejorative monikers he assigned.

Trump gave his all to his supporters. He fired them up at regular rallies and drew energy from their adulation and enthusiasm for his unconventional - critics said unpresidential - style.

"I see Trump as a fighter for the people that actually work and put the backbone into this country," said Will Williams, who attended Trump's June campaign rally in Tulsa, Oklahoma, as the coronavirus pandemic raged. "I will remember him as (a) hero." 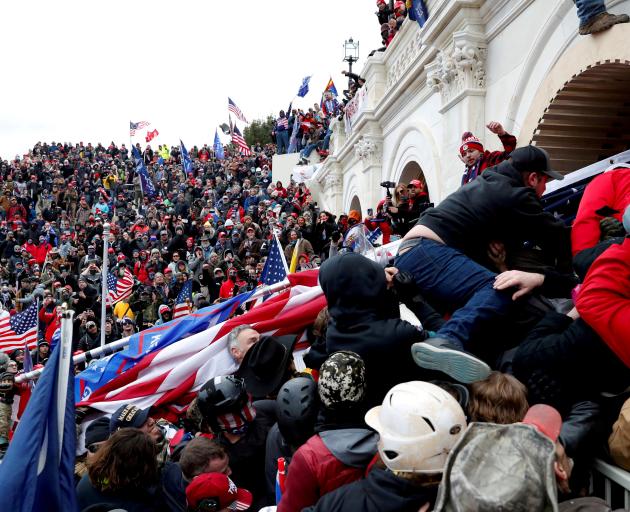 Pro-Trump protesters storm into the US Capitol during clashes with police, during a rally to contest the certification of the 2020 US presidential election results in Washington. Photo: Reuters
With the riot on January 6 at the US Capitol by Trump supporters who believed his false assertions of election fraud, the legacy of a second impeachment for spurring a deadly uprising will almost certainly overshadow any accomplishments, real or perceived.

"When a president incites an insurrection that could have killed his vice president, could have killed the speaker of the House and other members of Congress, could have destroyed a free presidential election and might have permanently impaired our democracy, there is very little good you can find that's going to outshine that," historian Michael Beschloss said.

On Wednesday (Thursday NZ time), Trump will leave the White House for the final time as the 45th president of the United States, taking his final flight on the Marine One helicopter to Joint Base Andrews, where he will board Air Force One for Florida.

Donald Trump greets supporters as he arrives on Air Force One in California. Photo: Getty Images
The trappings of the presidency will be taken away afterward and he will watch his successor, Democrat Joe Biden, seek to undo much of what Trump did during his term in office.

The reality show from the White House will be over. But his base, at least in part, will remain, still hanging on his statements, in whatever medium he finds to get them out.

"I think he does understand the power of his words. I think he relishes in it," said one senior administration official who considered resigning in the aftermath of the riot. "And I think he will continue to do so."

"who he felt were not carrying their financial weight in global alliances"...Not JUST Donald Trump, ODT...Many Americans have repeatedly asked why America has for decades, paid the lions share of defending Europe?! Trump was the only one with guts to demand NATO countries 'share the burden'...And rightly so!

And as for inciting an insurrection, let's look at his 'outrageous' tweet that triggered impeachment proceedings:

"We have come to demand that Congress do the right thing and only count the electors who have been lawfully slated, lawfully slated. I know that everyone here will soon be marching over to the Capitol building to peacefully and patriotically make your voices heard."

If ANYONE can spot 'incitement to riot' in those words...I'd love to hear from them!

It just shows how gullible and easily fooled the bias and hypocritical left have become in the last four years.
As long as it's anti-Trump, they really don't care about facts or the truth. It makes you wonder what underlying, deep-seated problems they really have.
Also, had Trump won last November, every city in the US would be burning right now..

You don't understand Executive Power, ODT reader. Insurrection does not need to be called for, it is an organic consequence of being the hero of a ravening mob. Gone. He stood in the shadow of Washington, Jefferson, Lincoln and other Liberal trash.

I think this is more Trump Derangement Syndrome. Contrary to what some have published here, turns out liberals are the real authoritarians. A political-science journal that published an oft-cited study claiming conservatives were more likely to show traits associated with “psychoticism” now says it got it wrong. Very wrong. The American Journal of Political Science published a correction this year saying that the 2012 paper has “an error” — and that liberal political beliefs, not conservative ones, are actually linked to psychoticism. In the paper, psychoticism is associated with traits such as intolerence, tough-mindedness, risk-taking, sensation-seeking, impulsivity and authoritarianism. Explains why liberals are constantly trying to force their views on others.