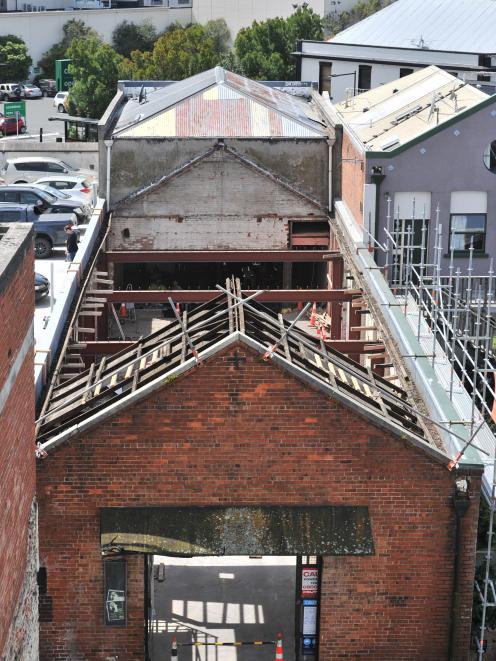 A new mixed-use development in Moray Pl-Bath St will bring new residences into the city. Photo: Christine O'Connor
The revitalisation of the George St heritage precinct has been given a boost by work well under way on a new mixed residential-commercial building at 318 Moray Pl.

The 400sqm building, which also backs on to Bath St, is owned by Edit South, a Queenstown-based developer which bought the building in May last year.

Edit South director Guy Shallard said the apartments — four one-bedroom units between 55sq m and 60sqm and a larger two-bedroom unit at the Moray Pl end — would be high end.

"There is a huge amount of commercial office space vacant from the first floor up around Dunedin, so we think there’s a big market opportunity for good residential rentals," he said.

In 1991 the original brick store — which dates back to 1908 — was converted into a bar area, most recently occupied by Diamond Lounge/Rumours, which closed several years ago.

Dunedin City Council consent shows there will be extensive internal alterations, which will create five residential units on the first floor, with a refitting of the ground floor into 345sqm of commercial space.

Both sides of the building frontage will be modernised, something that was "high time", a customer at Kiwibank next door said last week.

"The building looks pretty sad, so it’s great to see it being redone. I also like the idea of inner city apartments. I think we need more of those in the city," she said.

While the building is not classified as a heritage site, the consent noted several areas of non-compliance, including the height of the Bath Street entrance, which at 7m was considered 2m too low.

No parking bays are provided in the plans, but that was not unusual, DCC resource consent manager Alan Worthington said.

"Parking is not a requirement of any residential or commercial developments in the CBD under the city district plan," he said.

Harcourts Otago chief executive officer Kelvin Collins said while inner city apartments were a "necessity", buyers were still looking for some outdoor space and they also required parking, both of which were limited in the inner city.

"We also need to free up some space in areas with larger homes — people who were perhaps sitting on properties in Maori Hill or Roslyn, who wanted to downsize but had no real options locally," he said.