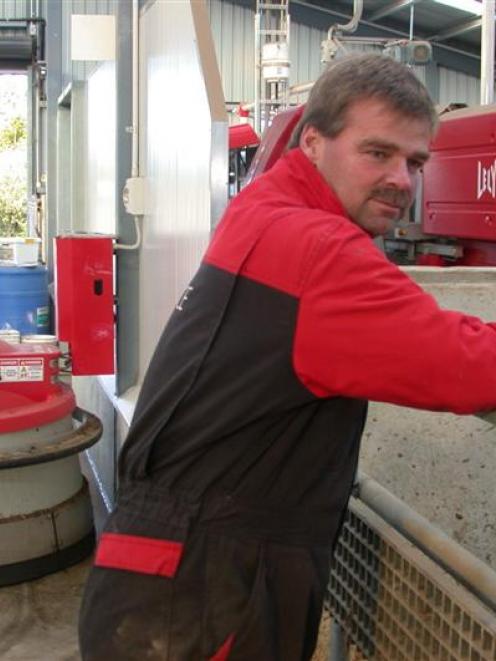 Aad van Leeuwen with, at left, an automated sweeping robot, called Rob, after his bank manager, and, at right, a robotic milking stall. Photo by Neal Wallace.
Housing 500 dairy cows in a barn may not fit the image of a typical New Zealand dairy farm, but it is hard to question the method when you see relaxed and contented cows quietly chewing their cud.

Aad and Wilma van Leeuwen have invested $4.5 million in a European-style, self-contained facility at Morven in South Canterbury, in which the 500 cows are housed in a barn and milked by six computerised robot milking machines.

Milk production was about double that of cows outdoors at about 500kg of milk solids a cow, but Mr van Leeuwen believed 600kg/ms was achievablem as 80% of the Jersey herd are first-calvers. 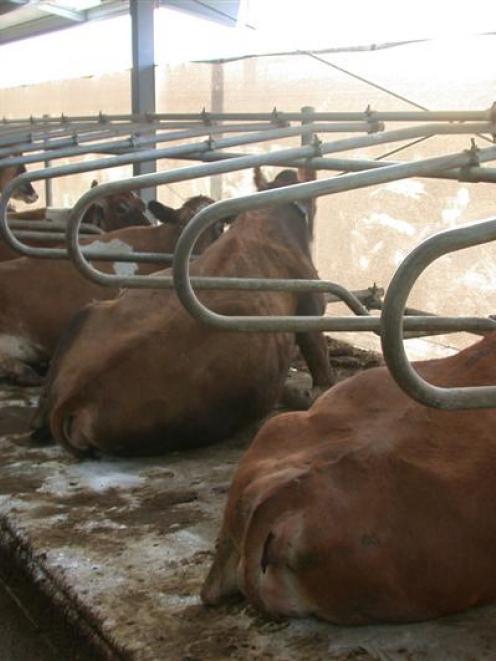 There may be 500 cows housed in the shed, but they are happy, relaxed and there is little noise. Photo by Neal Wallace.
The Jersey cows will each eat 5000 to 5500kg dry matter a year, but over winter they will eat about 8kg of dry matter a daym compared to between 15kg and 16kg dry matter a day if outdoors.

But Mr van Leeuwen said there were other more practical reasons for his venture.

"The dairy industry has grown rapidly in New Zealand in the last 15 years, herds have got bigger, but the skill of staff has not kept pace."

There were fewer people with the right skills than there were jobs.

"I have swapped human capital for technology."

Eventually he wants to milk 600 cows which will each spend 10 months in the shed. 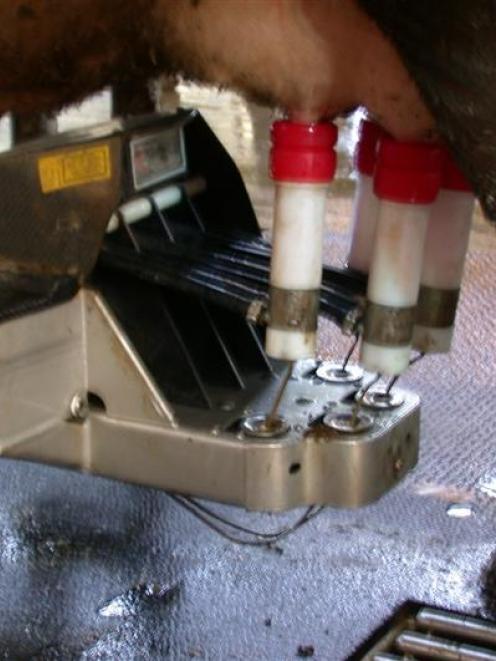 The milking robot uses lasers to find a cow's teats. Cows average six minutes in the milking box and visit it 2.3 times in a 24-hour period. Photo by Neal Wallace.
Each quarter 150 newly calved cows will come in to replace a similar number which will dried off and kept outdoors.

Key to the operation is a collar containing a computer chip worn by each cow, which collects information and allows a computer to compile a picture of her health, actions and performance.

The shed is 100m by 32m with pens on either side of a lane. The cows have free access to feed and water and a raised latex and rubber mat provides bedding. A scratching pole is also provided.

They are fed a diet of grass, lucerne and maize silage, canola, soya beans and stock pellets, which is mixed in a large tractor-mounted feed wagon.

"It's a protein game," he said, referring to the naturally high protein content cows get from pasture.

Protein levels from each silage stack are monitored to ensure the cows are getting adequate levels, because it can differ from paddock to paddock.

A robot sweeper, called Bobm after his bank manager, continuously moves up and down the lanes pushing feed back within reach of the cows, not only reducing waste but also reminding the cows to visit the milk machines.

"It has been proven that it brings 10% more cows to the robots for milking," Mr van Leeuwen said of the feed sweeping.

Stock pellets encourage cows to visit the robot milking machines, something they do 2.3 times in a 24-hour period, on average.

The computer will reject any cows which have less than five litres of milk or visit the milking box too often.

As the cows enter the milking box, the computer immediately starts accumulating information, such as weight, the last time the cow visited, its health and it can monitor milk production from each quarter of the udder.

The cow's teats are automatically cleaned, a laser finds each teat and the cups are attached.

Cows spend about six minutes in the milking box.

After milking the teats are sprayed to maintain hygiene and the cups steam cleaned.

Twice a day the milk lines are automatically cleaned.

Each Lely milking robot is self-contained with its own pump, boiler, battery and back-up generator.

Mr van Leeuwen said each morning staff check the computer which records when each cow last visited and any trends, such as weight loss or other health issues which they need to check.

Mr van Leeuwen said the computer was so sensitive that nine out of 10 cow alerts proved baseless.

There have been some interesting trends.

He said the quietest time of the day for milking was between 3am and 4am and some cows returned to the same stall to sleep.

Mr van Leeuwen said the biggest gain was being able to have a consistent and full milking lactation, important for his town supply contract. He can be penalised if he does not fullfil his quota.

During this winter's flooding and storms, he said production did not alter.

He has a wintering shed on another farm and said during the storms cows which were outdoors lingered around the shed looking longingly at those indoors.

Effluent is automatically scraped in to a pit which has seven to eight weeks holding capacity.

When ready to be emptied, it is mixed, then sucked out and applied to paddocks on the 170ha farm.

During a year, Mr van Leeuwen expects to apply 40 tonnes of effluent per hectare, negating the need for synthetic fertilisers, but providing enough nutrients to provide the silage needed for the housed cows. This is harvested from October to May.

Mr van Leeuwen is aware of the emotion and controversy surrounding a proposal to house cows in the Omarama basin, but he said the benefits were evident from having contented cows, which enjoyed a higher standard of health.