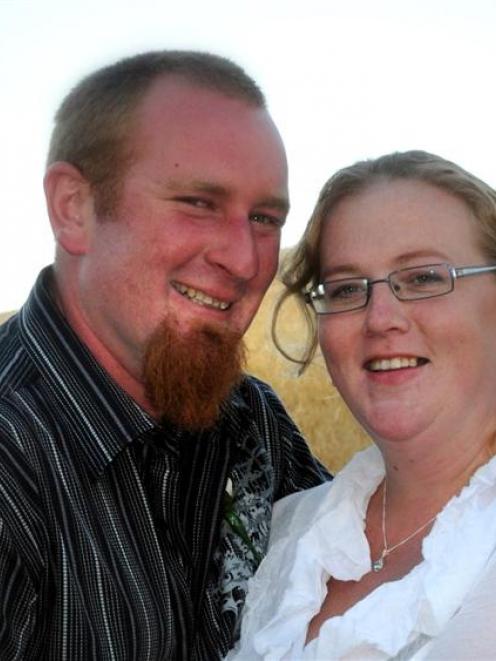 Telford Farms' new dairy unit managers, Shaun and Kim Phillips, are looking forward to being involved with a new dairy development. Photo supplied.
A dairy expansion planned at Telford Farms - costing just over $4 million - is the first major dairy development at the South Otago property for more than 20 years.

It will expand the area under dairying from 167ha to 233ha and increase the herd from 500 to about 700 cows over time.

A 54-aside rotary shed, utilising new technologies and in-shed feeding, was being investigated and quotes were being gathered for underpasses, lanes and water supply.

Telford Farms was looking forward to getting its new dairy unit managers, Shaun and Kim Phillips, on board to help with the expansion and shed plans, farm director Ian Knowles said.

Mr and Mrs Phillips, who are working on a new conversion in the Owaka Valley, will start work at Telford on June 1.

The couple have been involved in the dairy industry for 11 years since they started working on a dairy farm at Whataroa, on the West Coast, both aged 19.

Mr Phillips was a builder by trade and Mrs Phillips grew up on a dairy farm.

The couple later worked as herd managers on properties at Heriot, Orepuki and then Otahuti, where they were working for Wayne and Elaine Cook when Mr and Mrs Cook won the Sharemilker of the Year title in 2006.

After deciding they were ready to move into management and spending two years managing a farm at Riverton, they took a year off dairying.

The couple, who have three sons, were excited about their new job at Telford.

It was a big challenge "but a good one".

"It's a massive opportunity for us to learn as well as teach," Mrs Phillips said.

Telford Farms is working with AgResearch to apply for Pastoral 21 funding to increase the amount of dairy research conducted in the southern South IslandKey areas to be looked into include maximising farmer returns from grass-based systems, optimising the inputs of supplements, utilisation of facilities such as feed pads and indoor housing and mitigating the environmental footprint of dairying.

• A DairyNZ Telford Dairy open day will be held at Telford Rural Polytechnic on Monday.