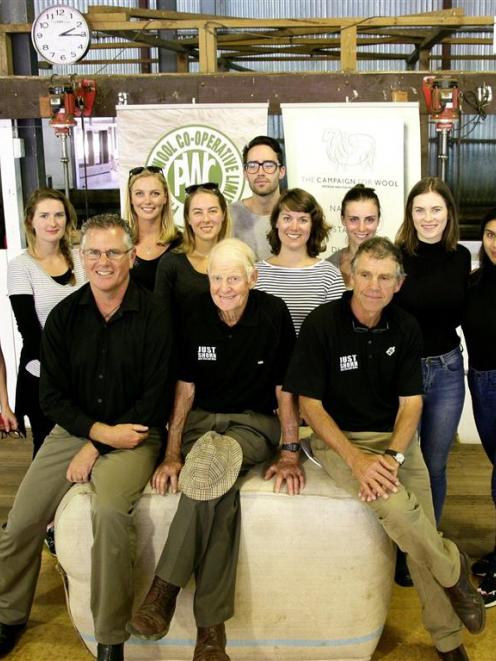 Much of that occurred when she was in a woolshed at Ngamatea Station with a group of other up-and-coming architecture, interior, spatial, product and industrial designers.

Weekend in a Woolshed involved three days at the North Island station working in a studio set up in a woolshed. Campaign for Wool (CFW), with support from the Primary Wool Co-operative, immersed the group of nine in wool and challenged them to create and innovate.

In 2010, 14 international architects and interior designers visited New Zealand and their concepts were published in a book called Wool in Architecture and Interior Design.

It was a natural progression to bring the challenge to New Zealand's next leading designers of homes, commercial spaces, interior and industrial products, Studio Pacific Architecture director and CFW Wool in Architecture ambassador Stephen McDougall said.

Ms Ronald (21) is in her fourth year at Massey University, studying towards a bachelor of design degree, majoring in textile design, with honours, and wool was the reason she decided to study design.

She grew up on a sheep farm at Fairfax, Southland, and, for her parents, wool was a "by-product''.

She always wanted to change that.

"For me, Weekend in a Woolshed was a great way to start my fourth year of study. I found the hospitality, knowledge and stories of the farm ... to be really interesting and informative.

"I liked that sheep farming is not simply a method of producing wool but it is a lifestyle and the stories and the people are what is important, rather than the end product,'' she said.

She enjoyed sitting on the tussock-covered hills, drawing the landscape, while the woolshed-turned-studio was an inspiring way to design.

Having a range of industry professionals there was also very helpful.

It was also interesting being involved in the event alongside a bunch of city folk and hearing what they had picked up on, things that she took for granted, having grown up on a farm.

"It was quite cool watching their reactions,'' she said.

Ms Ronald was also impressed to learn more about a product she had grown up with.

"I definitely feel like there is a lot of room for more wool in textile design/architecture and am excited to be a part of its future,'' she said.

CFW is an initiative of Prince Charles and the global education campaign is into its sixth year.

Campaign for Wool New Zealand Trust chairman Craig Smith was excited by their ideas for how wool could be used in homes and commercial spaces.

Those ideas would be revealed to a group of select people who might like to be an instrumental part of growing the future for strong wool by supporting the realisation of the ideas, Mr Smith said.