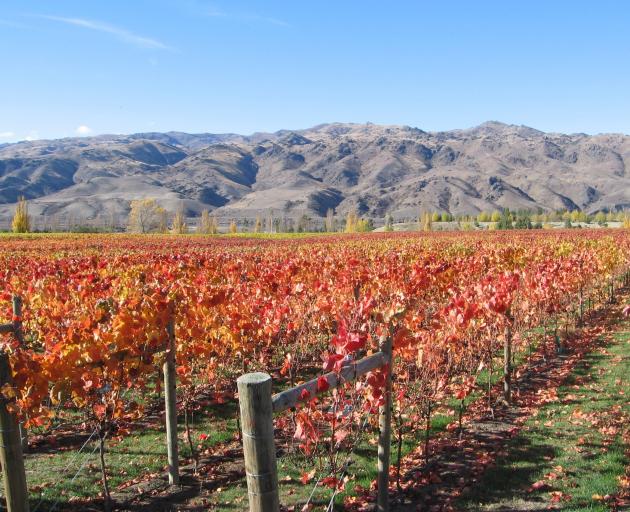 Increasingly warmer temperatures are likely to see new varieties of grapes such as syrah and merlot grown in Central Otago vineyards by the end of the century. Photo: SRL Archives
Wine enthusiasts may well be able to buy Central Otago-grown syrah and merlot in the next few decades, former Central Otago Winegrowers (COWGA) president James Dicey, of Bannockburn, tells Yvonne O'Hara.

Fruit will be sweeter, vines may well mature earlier and there may be a longer growing season by the end of the century.

Bodeker Scientific’s report "The past, present and future climate of Central Otago," was written and researched by scientist Chris Cameron and other team members and released last month.

Projections suggest a reduction of about half the number of frost days (up to 53 fewer) depending on location, can be expected by the end of the century, or even no frost days in some areas during spring and autumn.

There would be a longer growing season.

On the other hand, it was likely there would be more flooding and other extreme weather events.

Mr Dicey said if (average annual) temperatures increased, there would be opportunities to grow different grape varieties such as  syrah and merlot, which prefer the slightly warmer conditions.

"We will still be able to grow great pinot noir," Mr Dicey said.

"We will potentially be able to grow at a slightly higher levels [altitudes].

"If our environment has fewer frost days that is still very positive."

He said climate change for the Central Otago wine industry was not a "massive negative", although the changes, including the additional heat spells and peak temperatures, would require changes in viticulture management.

Sites will require different management techniques to maintain the character of the wine.

On the other hand, vineyards were likely to be affected by the projected increase in extreme rainfall and wind events and flooding.

"Floods are also going to have to be managed.

"A lot of people have been growing crops in much worse climates.

"It  is just a matter of one step at a time and understanding what is going on and how to manage it, as well as learning from other people.

"There is a lot of knowledge out there on how to do it.

"What ever happens, we will evolve," Mr Dicey said.

Studies looking at higher atmospheric carbon dioxide (a greenhouse gas) concentrations under controlled conditions have resulted in changes in increases in fruit weights by up to 45%, earlier ripening of fruit and increased colour development. — Bindi et al 2001.