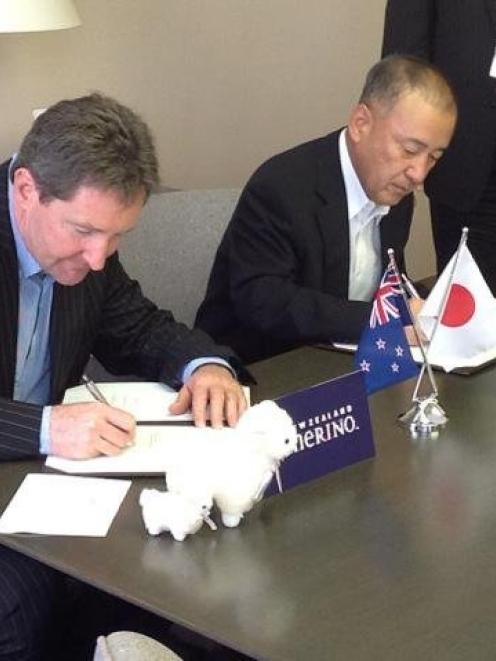 The New Zealand Merino Company (NZM) and its fine wool growers have a 17-year relationship with the Japanese manufacturer of wool textiles.

NZM has been workingclosely with Nikke to establish a new range of fabrics called Lezel Romance of the Regions. It told the legends of each of the main merino growing areas from 12.5 to 17.5 micron throughout the South Island and the reception during the launch phase has been extremely positive.

The stronger contracted fibres (19.5 and 21 micron) were destined for Nikke's expanding uniform business. The Japanese company was ''very, very big'' in the uniform business and provided a lot of uniforms for emergency services and also for corporate companies. A lot of wool and wool blends was used at that end of the market.

The company's director of textile business had been converting schools to use Nikke's ZQ merino uniforms as a point of difference in an increasingly competitive school market. There were now 56 schools connected with New Zealand through their choice of uniforms.

''We're excited about the huge potential with Nikke, as they chase their global aspirations.

''It's easy to say things take too long in Japan or its not the boom country it once was but their passion and knowledge of wool is immense, as is their respect for the efforts of New Zealand's merino growers,'' Mr Hargadon said.

In the last six months, the company's senior executives had visited New Zealand three times, which showed their keenness, he said.

The deal was a boost for the finer end of the market, which has been under pressure. New Zealand Merino chief executive John Brakenridge said it was extremely important to be developing stable, high value markets for growers of those finer wool types, particularly as fine wools were flooding on to the market in Australia and consequently there was a pessimistic commodity outlook for fine wool prices.